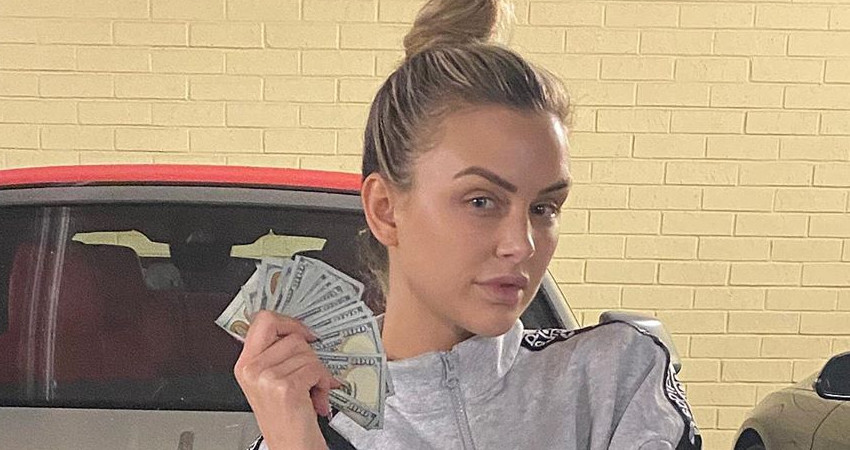 Fired up ‘Fofty!’ Rapper-actor 50 Cent is not happy with Vanderpump Rules star Lala Kent. She alluded to his feud with her fiancé Randall Emmett during the Season 8 reunion. While Lala didn’t name him directly, everyone knew who she was talking about.

Picture it: April 2019. A much simpler time when we didn’t have to wear face masks or social distance on demand. No one had ‘feud between rapper and movie producer and a VPR star’ on their 2019 Bingo cards.

However, a feud ignited between the two on a random weekend in April. 50 Cent posted on social media that Randall owed him money, $1 million to be exact. And he wanted it by Monday.

Randall was so stressed about the public shaming that he ended up in the hospital with chest pains. He also forgot to proofread his texts, mistyping ‘Fifty’ and ‘Fofty.’ And a catchphrase was born.

All’s well that ends well. Randall was able to scrounge up the money and pay up. 50 Cent called a cease fire but sparks reignite between 50 Cent and VPR‘s Lala occasionally.

Forget Jax Taylor and Brittany Cartwright’s wedding. The real drama VPR fans wanted to see was the feud with 50 Cent. However, it only came up briefly once during VPR’s Season 8.

During the weekend of the feud, James Kennedy posted a joke about it and Lala cut him out of her life for it. He apologized to Lala on-camera during Season 8 and the feud was never brought up again.

Until the VPR Season 8 reunion. Host Andy Cohen asked Lala why the feud wasn’t shown. Lala cited legal issues as the reason. Indeed, she spoke very carefully about the situation, never once mentioning 50 Cent by name.

Instead, she said, “a pretty famous rapper.” But 50 Cent knew who she meant and so did fans.

50 Cent took to Instagram after the show aired to call out Lala for bringing up the feud. According to 50 Cent, his “beef” was never with Lala, but with Randall.

The rapper said the issue with Randall is “done” because Randall paid up. However, 50 Cent doesn’t understand why “this b**ch,” meaning Lala, “don’t just leave it alone.”

He also calls her a “hoe,” not for the first time.

There was another bit player in the feud between the rapper and producer. Randall’s ex-wife, actress Ambyr Childers. She joked in the comments of one of 50 Cent’s Lala diss posts that she needs wine, Reality Blurb reports.

While Lala and Ambyr get along now, they didn’t always. 50 Cent invokes her name by saying that “Amber [sic] is laughing” at Randall’s choice of women.

Lala has yet to respond to 50 Cent calling her out.

Part 3 of the Vanderpump Rules Season 8 reunion airs next Tuesday, June 16, on Bravo.