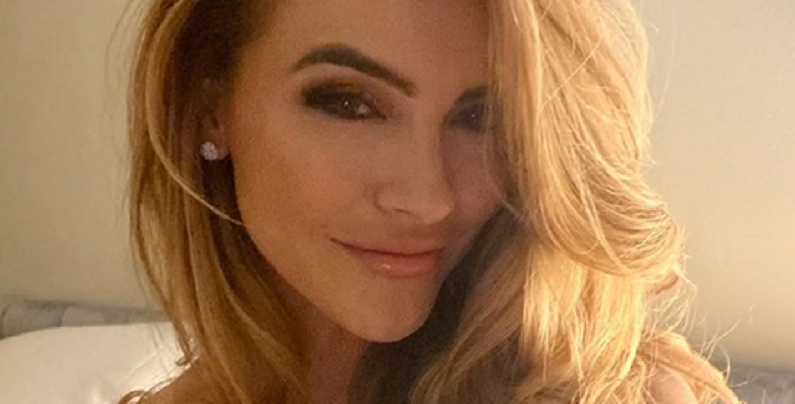 Chrishell Stause is trying to stay positive these days. The Days of Our Lives star has had a tumultuous year. The actress is still dealing with the hurt and pain from her shocking divorce to This Is Us star Justin Hartley.

Earlier this year, Chrishell announced on Instagram that her mother has lung cancer and only has a few months to live. On top of that, she had to deal with online threats. But the daytime actress isn’t letting any of this get to her. Instead, she wants to “focus on the positive side of things.”

Days of Our Lives star wants to focus on “positive” things

In an exclusive interview with Us Weekly, Chrishell Stause revealed that she’s trying to focus on the positive. This comes six months after her shocking split from Justin Hartley. The 38-year-old spoke to the outlet about her future. Stause is currently promoting the new season of her series, Selling Sunset. While change has been hard, she hasn’t had a problem with focusing on other things in life.

“Transitions are hard, but I always try to focus on the positive side of things,” Stause said. “Thankfully there is a lot to focus on right now.”

Back in December, Stause broke her social media silence by posting a cryptic message that read, “It’s hard to watch people change right in front of you. But it’s even harder remembering who they used to be.” The quote comes from author Nishan Panwar. That came after the model and the 43-year-old actor separated in November 2019 after two years of marriage. Hartley’s divorce filing not only came as a shock to his ex-wife, but also their fans, friends, and family members.

I was nominated for the #SellingSunsetHomeChallenge *SWIPE* to see a few things that are helping me be more productive at home since I am not going into the office.😄Hopefully it can be helpful to some of you as well! My clients already got an inbox of listings today, so thanks for the challenge @adamdivello 🙌🏽 Ok @themaryfitzgerald, you’re up! 😅 #SellingSunset #NowStreaming #Netflix Season 2 drops May 22nd! #lionsgate #LionsgateTV

Amid their split and the coronavirus pandemic, the All My Children alum says she’s been staying positive in every aspect of her life.

“As far as career and life go, I don’t have a plan because I’ve seen what good those are,” Stause said. “I just have a really open mind and am going to enjoy the journey.”

She also signed on with United Talent Agency, which has been one of her goals. Stause said she’s been “working so hard” to get where she wants. She wants to succeed in both real estate and scripted work. Since Selling Sunset is returning for its second season, Stause has a lot to look forward to.

Chrishell Stause has new opportunities to look forward to

The actress has plenty of new things to celebrate. Although the coronavirus has been hard on her and her family, Chrishell Stause has been grateful for the opportunities that have still come her way. She considers herself lucky, especially since the entertainment industry is on halt due to the ongoing pandemic. The lockdown in Los Angele may not ease until July.

“We are in the middle of such a crazy chaotic time,” the actress said. “So to be able to have some great news that I am really proud of right now, I am just extremely thankful and grateful.”

Makeup tutorials are not my specialty I have learned 🤣🤦🏻‍♀️ But I had fun getting ready with you on live for this look today! Swipe➡️ This is what I wore for what I was filming today. So I guess this answers the age old question. Does the carpet match the drapes? Also how many things can I match to the drapes…?🤣😜😆 * * Bodysuit is @nakedwardrobe

Stause and Hartley married in October 2017 after dating for four years. The couple ended their marriage in fall of 2019. She was previously engaged to Matthew Morrison from 2006 to 2007. Hartley was previously married to Lindsay Hartley from 2004 to 2012. The couple shares a daughter, Isabella.

Season 2 of Selling Sunset premieres Friday, May 22 on Netflix. Check back with TV Shows Ace for the latest news on Chrishell Stause.