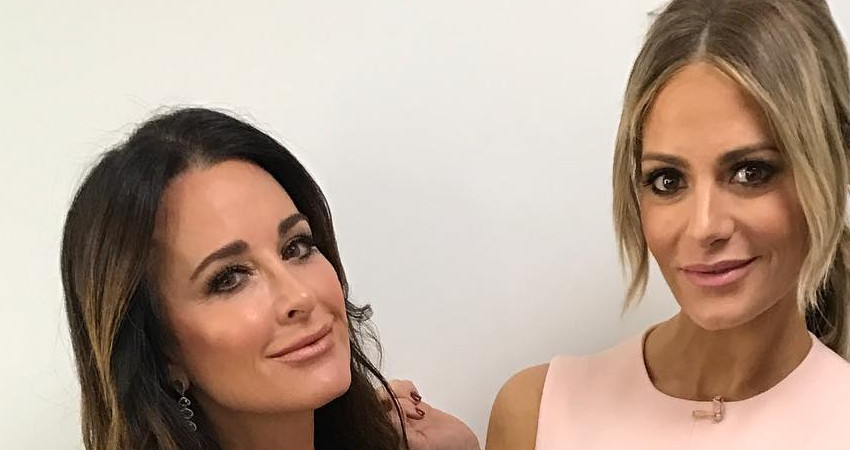 The Real Housewives of Beverly Hills is missing its queen. Lisa Vanderpump quit the reality show after a tense Season 9. While Lisa has moved on, the current cast of RHOBH can’t seem to escape her absence.

During press for the new season, Lisa’s name kept coming up. The ladies did discuss her exit during the Season 10 premiere, but most of the drama this season revolves around Denise Richards.

Lisa’s former BFF, Kyle Richards, recently opened up about how it felt to film without Lisa. Plus, Andy Cohen jokes about one of the RHOBH star’s outfits.

Kyle was a guest on Andy Cohen’s Watch What Happens Live on Wednesday, April 29. People reports that the subject of Lisa’s exit from RHOBH. Kyle admits that filming without Lisa was strange at first. She said,

“I did feel weird because we started together, 10 years ago.”

Both Lisa and Kyle are original cast members of RHOBH. Now that Lisa is gone, Kyle is the last OG standing, though some of the others make the occasional guest appearance.

However, Kyle said drama with the other women jumped off so quickly that they no longer “think about it.”

In fact, some RHOBH stars are rather enjoying filming without Lisa around. As TV Shows Ace reports, Dorit Kemsley feels a sense of “freedom” to have her own opinions. Kyle’s co-star, Teddi Mellencamp, was also on WWHL on Wednesday.

Teddi said that she was able to connect with the rest of the cast more than in her first two seasons.

At the end of the Season 10’s second episode, the producers shared a behind-the-scenes clip of Dorit and her husband, PK Kemsley, finally discussing the lawsuits against them. In the clip, Dorit is wearing a black-and-white shirt with a black hat.

During WWHL with Kyle and Teddi, Andy joked that Dorit looked like the Hamburgler, McDonald’s mascot from the 1980s. Kyle and Teddi cracked up at the joke. Kyle chimed in that she “had the same thought” about Dorit’s outfit.

The jokes didn’t go without Dorit’s notice. She took to Instagram the next day to jokingly clap back at the mockery. She posted a photo of herself wearing the outfit, kneeling alongside her daughter.

The RHOBH star captioned the photo “Baby girl and the “hamburgler.” Dorit added a laughing-crying emoji and a shoulder-shrug emoji to indicate she was in on the joke. See the cheeky photo below.

Tell us in the comments how RHOBH is doing without Lisa.

The Real Housewives of Beverly Hills airs Wednesdays on Bravo. Watch a sneak peek at next week’s episode below.