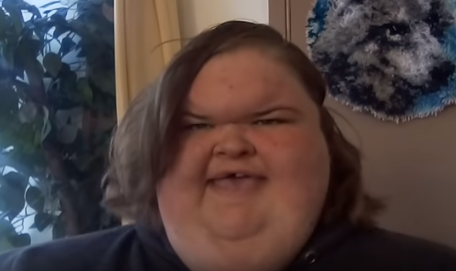 Tammy Slaton of 1,000-Lb. Sisters joined Tiktok and her first video is pretty awesome! She began her Tiktok journey with a little Britney Spears, a great choice for a first post!

Could Tiktok be Tammy’s Saving Grace?

She chose the hit “Oops!… I Did It Again” by Britney Spears. The video shows the reality star twirling her gum with the song playing in the background.

Fans of the show know that Tammy is not one to get up and bust out some dance moves, but here’s to hoping this is a step in the right direction.

Tammy stars in the reality show, 1,000-Lb. Sisters, with her sister Amy. It features their life and their fight to get healthy and lose weight.

Tammy joining Tiktok may be exactly what is needed to get her up and moving around. Currently, she weighs 605 lbs and is in a constant argument with her sister about needing to get up and move her body.

Last week’s episode featured Amy attempting to get Tammy off the couch and exercising with something pretty familiar… dance workout video games!

“I thought it would be a neat way to move around a bit,” Amy told Tammy. So, they get up along with Amy’s husband and start dancing along to the game.

But they quickly ran into a problem, Tammy gave up on the dancing, “I can’t do this” she says. She went and sat down on the couch as Amy continued to dance and finished the song. It’s noticeable that Amy isn’t happy with her sister for not continuing the exercise.

The Girls Made The Front Page!

Both of the girls struggle with diabetes and high blood pressure and with each episode they continue to address their problems. It is possible that they will get some sort of gastric bypass surgery one day. But, they have to lose some weight before they are eligible to get the surgery.

On a recent episode of the show, Tammy’s doctor is concerned that she isn’t understanding the severity of her health. He expresses to her that her health is her responsibility and she needs to take it more seriously.

The sister duo is a smash hit and has been popular on YouTube for a while now. They continually crack people up as they describe different things in their lives like their favorite snacks. By the way, the snack is “dressed bananas,” which is a banana dipped n Miracle Whip and rolled in chopped peanuts. 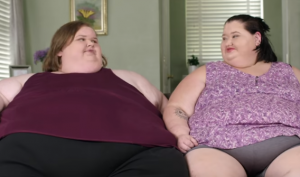 According to The Blast, Amy and Tammy Slaton have made front-page news in their home town of Dixon, Kentucky. They were super excited when they made the front page of the local newspaper, they even shared a picture with their fans.

Maybe Tiktok is just what the doctor has in store for Tammy!