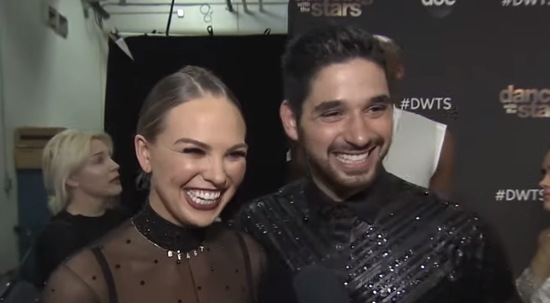 Hannah Brown, the former Bachelorette contestant, has been serving some amazing moves and receiving matching scores with her partner Alan Bersten on Dancing With the Stars. But these amazing yet difficult moves have taken quite the toll on Hannah, with bruises to prove it.

Hannah hopped on her Instagram Stories before Monday night’s episode of DWTS to reveal what she likes to call her “battle scars,” from practicing that night’s routine.

“Not trying to be inappropriate, but I want to show you guys my battle scars from this week. It’s pretty gnarly, but I got it doing a really cool trick. Can’t wait to show you guys,” she prefaced before showing the bruises on her right leg.

Hannah, unfortunately, isn’t the only contestant this season with an injury. Right before the season 28 premiere began, Christie Brinkley broke her arm during rehearsals and had to set down from the competition. Luckily, her daughter, Sailor stepped up and took her place. Roughly three weeks after, Raw Lewis had to leave the competition due to a foot injury. Hannah is planning to continue dancing in the competition, regardless of the bruises.

Hannah Brown has the chance to continue her hot streak, depending on her upcoming performances. In the season premiere, she received the second-highest score of the night, 20 out of 30 with James Van Der Beek and Emma Slater with the highest. In week two, she brought her score up to a 24 out of 30 and had the highest score of the night. But a week later, she came in third place with 21 out of 30.

Hannah Channels Her Rage Against Her Ex-Boyfriends

In a previous week’s episode, judge Carrie Ann Inaba said Hannah’s performance was too “cheerleader-like.” Hannah took this comment to heart, saying that she “learned to hide behind the smile.” So Alan took it upon himself to help her with his, he took her to a wrecking room. According to Cosmopolitan, Hannah channeled her aggression towards her ex-boyfriends while smashing glass bottles.

According to GoodHouseKeeping, Hannah is enjoying her time working with Alan in the ballroom. Although, she recently told Marie Claire that it hasn’t all been easy, given what’s been happening in her personal life recently. Earlier this year, Hannah broke off her engagement to Jed Wyatt.

“It’s not just about winning the Mirrorball,” she said. “I want to be in this competition as long as possible because I know I need this growth.”