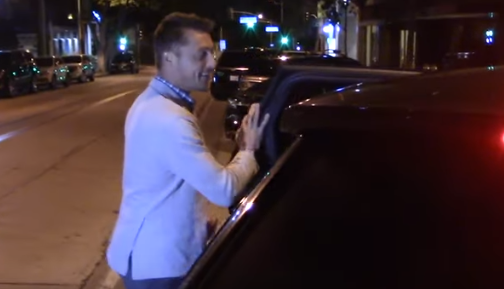 Chris Soules, a former Bachelor star recently was seen in the audience of Dancing With the Stars, this past Monday. This visit to the ballroom is one of his first public appearances since he was involved in a fatal car crash back in 2017.

Soules Return Was Not The Only Familiar Face In The Crowd

In 2015, Soules competed on DWTS during season 20, he was likely at the taping on Monday to cheer on his former partner, Witney Carson and his fellow Bachelor Nation member, Hannah Brown. Though, he wasn’t the only famous face in the audience that night. Demi Lovato, Zooey Deschanel, and Jonathan Scott were also spotted. As well as, Demi Burnett from the Bachelor Nation and Queer Eye’s Bobby Berk, cheering on their favorites.

Soules attended just a month after he received his two-year suspended sentence, along with two years of probation for his part in the crash. His appearance has many viewers struck and taking to Twitter to verify what they had seen.

DWTS is wild…I’ve already spotted Chris Soules (why aren’t you in jail???) and half the cast of Crazy Ex-Girlfriend

IS THAT CHRIS SOULES??!!?!?? AINT THAT MAN SUPPOSED TO BE IN PRISON

In September, Soules opened up about the accident for the first time, saying that he thinks about it daily.

“The trauma of being involved in the accident is something I cannot describe,” he said. “There is not a day that goes by that I don’t wish I could have done more or change the outcome of what happened. My outlook on life has changed forever.”

In Aurora, Iowa, Soules’ pick-up truck hit a tractor, killing the driver, 66-year-old Kenneth Mosher. Soules received a charge of leaving the scene of a fatal crash. He pleaded guilty in November 2018 to an aggravated misdemeanor charge of leaving the scene of an accident resulting in serious injury. Soules agreed to pay a $625 fine in addition to his two-year suspended sentence.

According to PopCulture, due to a civil settlement with Mosher’s family, certain details of the accident cannot be discussed. Soules did say that he began to administer CPR to Mosher when he could after the crash. He called an attorney when he got home. His plea deal amended the charge to an aggravated misdemeanor after he was charged with leaving the scene of a fatal crash.

“I saw some dark times,” Soules said. “I’m in the middle of nowhere as it is and I was even deeper in the isolation and the guilt. I thought many times that it would have been easier on the other side.”

He added that he will live with what happened forever. He says he will carry on and do something bigger and better with his life as a result of this tragedy.