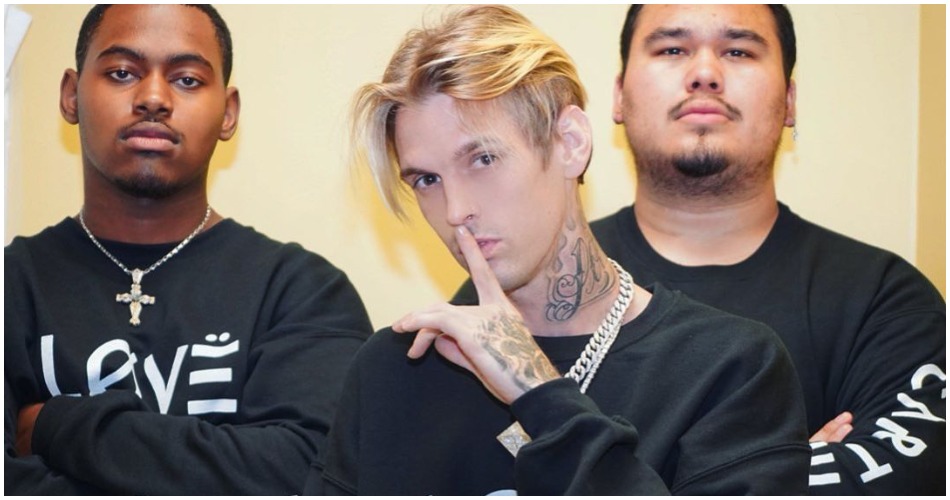 There is a lot of drama brewing in the Carter family recently and Aaron hasn’t held back any punches on social media.

The 31-year-old singer has been raging war against his older brother Nick, his twin sister Angel, and anyone else who tries to silence his voice since Thursday.

His brother and twin sister filed restraining orders against him, claimed they feared for their lives.

According to TMZ, court documents reveal his twin sister Angel filed a restraining order against him that has since been granted by the judge.

In the documents, Angel claimed she had a phone conversation with her brother during which he threatened that he had “people” who could come hurt her.

Angel filed the restraining order out of fear for her life as well as the life of her husband and her daughter amid her brother proudly flaunting his firearms via social media.

The court documents detail a FaceTime conversation where Aaron allegedly discusses “killing babies” with his sister.

Per the restraining order, Aaron cannot go within 100 yards of Angel or her family. The order bars him from making threats on social media or brandishing his weapons.

Nick Carter has posted an update days after he filed a restraining order against Aaron Carter for his alleged "thoughts and intentions" of killing Nick's pregnant wife and unborn child. https://t.co/y2K9PGwwmL pic.twitter.com/h7brXP1Epb

It was a few days prior to the 19th that news broke of Nick Carter filing a temporary restraining order against his baby brother.

“In light of Aaron’s increasingly alarming behavior and his recent confession that he harbors thoughts and intentions of killing my pregnant wife and unborn child,” Nick explained per TMZ.

Aaron Carter has reacted to both restraining orders on Twitter.

Possibly in response to the restraining orders, Aaron Carter took to his Instagram account to reveal that his late older sister Leslie raped him. According to his tweet, the sexual assault lasted for years.

my sister raped me from the age of 10 to 13 years old when she wasn’t on her medications and I was absused not only sexually by her but by my first two back up dancers when I was 8 years old. And my brother absused me my whole life.

His tweet also revealed that the abuse of his sister was not his first time as a victim. Two backup dancers allegedly abused him at the age of eight.

Making this worse, he also admitted to suffering a lifetime of abuse from his older brother Nick.

Unsurprisingly, many responded to the allegations against Nick by sharing an incident during the older brother smashed a pie into his younger brother’s face as he won an award.

No not at all totally cool right!? When I’m giving my acceptance speech and he does this? When I was 13 years old. It didn’t feel like anything after he broke my nose. https://t.co/qJIxEP6MSE pic.twitter.com/PsBaVg2se2

In hindsight, many now see the action as aggressive.

Twitter has opinions and the pop singer isn’t willing to back down.

Many have tagged Aaron and asked him to “leave Nick alone.” Questioning if he’s having a meltdown. And, outright telling him to “get him.” The pop singer has fired back at the naysayers. He also re-tweeted some of those who have showered him with love and support.

I will ABSOLUTELY shut down all #Cyberbullies I HAVE FREEDOM OF SPEECH. I’m not sending terroristic threats. Why didn’t angel and nick call the cops on me right away verses waiting almost three months if ehatbtheyre saying is all true? I want to kill my sister in law & nothing? https://t.co/MgXRZvg6bE

In another tweet, Carter shared a snapshot of someone flipping the bird as he declared: “To whoever can’t stand the truth and me being honest you might not like it but I’ve never felt better in my life.”

In several tweets, Aaron also pointed out the fact that Backstreet Boys’ fans were so quick to defend his brother. He believes they do so because they are afraid of the truth. He repeatedly refers to fans of Backstreet Boys as the largest cyberbullies.

“And I cannot be stopped. I am A VICTIM abused sexually and physically.”

As People Magazine reported last month, drama surrounding Aaron Carter’s family will continue to be aired. He will appear on the upcoming season of Marriage Boot Camp: Family Edition.

I’m happier then ever. I got my momma in rehab. I’m two years clean and sober day by day and have had my ups and downs but I can say I’m truly happy and healthier everyday without the toxicity of my last relationship and removing myself from my family. pic.twitter.com/FvnyFg2OQ2

Fans get a closer look at “the pop star who lost millions to his momager.”

The teaser reveals Jane insisting that she never touched her son’s money. He becomes emotional as he begs for “the truth.”

I don’t need to “calm down” I am calm. I am very aware of the “case” my family is attempting to build against me and angel and nick and Lauren cannot silence me. It’s over guys. Give up!!! And angel I’m appalled you know the abuse and you are siding with nick MY TWIN SISTER! 🤦🏼‍♂️ https://t.co/SK3KO17VC1 pic.twitter.com/ttC5QEnMxv

Fans of Aaron Carter can follow him on Twitter as he remains vocal about victims of abuse and the situation as it continues to unfold.