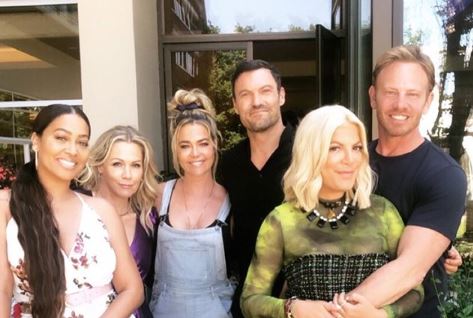 Despite the reboot’s smashing success, the salaries of the returning BH90210 cast has some fans shocked.

It was back in February that news of the Beverly Hills 90210 reboot was confirmed. The reboot came with a bit of a traditional spin. For starters, it isn’t a typical reboot. It isn’t a revival either. The show features the original BH90210 cast. The cast comes together to sell a reboot.

The first episode of the reboot was a huge hit. It contained a lot of praise for long-time fans. It also contained a heartwarming tribute to the late Luke Perry. The premiere was record-breaking for the network.

The BH90210 Cast Salaries Are Shocking

Being both a smashing success and a highly-anticipated reboot, many expected it to come with an expensive price tag. According to The Hollywood Reporter, the cast salaries aren’t nearly what fans expect them to be.

The seven cast members reportedly make $70,000 per episode. This works out to $420,000 per actor for the season. Some cast members, such as Garth and Spelling, do stand to earn a little more. They receive an additional $15,000 fee for co-creating an episode. Priestly receives an extra $46,000 for assisting in directing an episode.

Take it from @pastemagazine – you've never seen anything like the new #BH90210! 😍

The substantial salary is shockingly lower than other shows in the industry. Speaking to The Hollywood Reporter, a talent agent estimated six-figure salaries.

According to Screen Rant, the salaries can be best compared to the reboot of Will & Grace. Each member of the cast received $250,000 for the first season. The salary increased by $100,000 for the second and third season.

Could The Reboot Be Extended?

Presently, it is too early to know if the BH90210 will remain a hit. The cast, however, is open to extending the reboot into additional seasons.

Spelling even openly admitted there were several different directions the series could explore if extended into additional seasons.

If the series is renewed for additional seasons, the cast shouldn’t have much trouble pushing for a sizable raise.

Episodes of the BH90210 reboot air on Wednesday nights only on Fox. The premiere aired last week and the second episode titled “The Pitch” aired yesterday.

Feeling the love from @entertainmentweekly. 😭 Catch up on the premiere and start making memories at the link in our bio. #BH90210

Have you tuned in to watch the Beverly Hills 90210 reboot? Did you find the salaries of the cast to be shocking?

Keep coming back to TV Shows Ace for the latest scoop on the revival and reboot of your favorite TV shows!