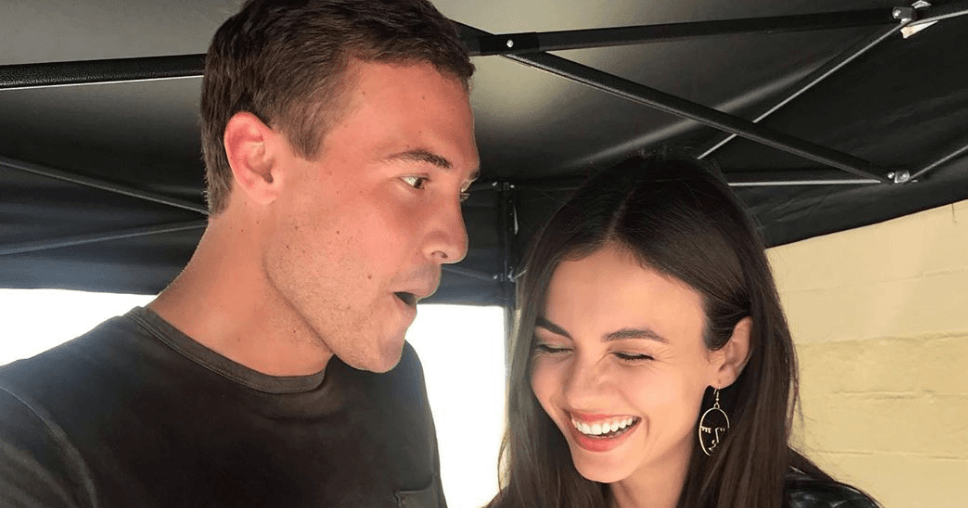 Peter the Pilot is still a contender on The Bachelorette. However, he was recently seen hanging out with a star from the show Victorious. The reasoning behind it is kind of odd too.

Peter the Pilot has become a fan favorite on The Bachelorette this season. He’s sweet and cute, making him the perfect man. However, according to Refinery29, he was seen running around with none other than Victoria Justice. She’s probably best remembered for her role on the show Victorious.

This spotting had a lot of people speculating. Was this a hint he got sent home? Has he already moved on and with another TV star? It looks like it’s none of the above. Turns out, his mom is friends with Victoria’s mom. It is a small world.

The two have actually been friends since she was nine. How cute is that? Victoria posted a bunch of photos of her with Peter on Instagram. In the caption she made it pretty clear the two aren’t dating by asking everyone not to start any rumors. Anytime you hang out with a reality TV star, you definitely have to clarify or else everyone will start to assume.

So great catching up with you today @pilot_pete ! For those of you who watch the Bachelorette, I’m sure you know Peter. We’ve been friends since I was 9 back in Florida & our moms are good friends (so let’s not start any crazy rumors ha). We all haven’t seen each other in years & it was so much fun catching up & reminiscing. 🤗 I still have no idea how the show ends! Can’t wait to seeeeee 😎🌹

Even she doesn’t know how the season ends so guess it will be a pretty big surprise for her either way! Peter did a good job of keeping everything on the DL!

Peter commented back on Victoria’s post saying: “So fun, great catching up!” he said. “Let the Scare Tactics begin! 😜”

Probably some super fun inside joke between him and Victoria. If he and Hannah don’t end up together, could their be hope for Peter and Victoria? They do make a super cute couple in the photos. He is so sweet he deserves someone who will love him unconditionally.

Who will win ‘The Bachelorette’?

Reality Steve has told everyone who will win the season. Right now, Peter is still in the running along with Luke P. No one is so sure why he’s still even on the show after he’s been acting so horrible. However, Hannah must’ve seen some good in him. That’s the only reason she would keep him around.

What do you think of Peter the Pilot? Let us know in the comments. Be sure to watch the new episodes of The Bachelorette next Monday night. Hannah is getting closer and closer to discovering who her husband is. You don’t want to miss out!

‘I Love A Mama’s Boy’ Why Fans Are Adamant Matt Is Gay?
Where Will Anna Duggar Be For Her 34th Birthday?
Todd Chrisley Tells Fans ‘Best Gift’ They Can Give Him
Audrey Roloff Panics As Radley Bubbles Under Water
Tori Roloff Shares Adorable ‘Twinning’ Snap Of Boys