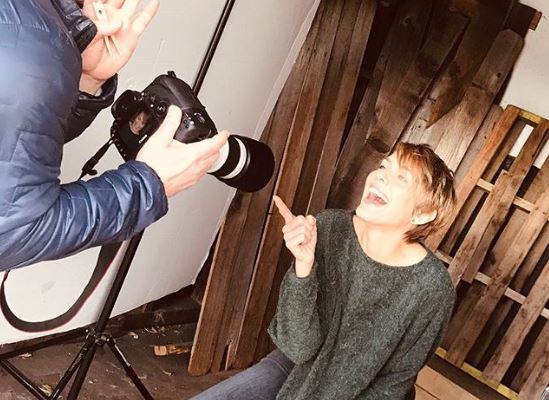 Days of Our Lives viewers have been waiting for Arianne Zucker to return to the soap. The fan favorite first announced in early 2017 that she was leaving the show after playing Nicole Walker off-and-on for 18 years. Her character presumably perished in a warehouse fire in October of 2018.

Rumors began by the end of the year that the actress would be returning in 2019. It was revealed in February that she would return in time for May sweeps. As much as Days of Our Lives loves the back-from-the-dead stories, fans were curious why Nicole would be back so soon.

The answer is in the promo video for next week. Nicole is actually Kristen in disguise. And she’s back to win Brady (Eric Martsolf) back. “Nicole” came back just as her daughter Holly (Harlow and Scarlett Mallory) was “killed” in an explosion. Holly is actually alive. “Nicole” and Xander (Paul Telfer) were partners in kidnapping Holly and faking her death.

Before the warehouse fire, reunited with Eric (Greg Vaughn.) Kristen does everything she can as Nicole to push Eric away, including blaming him for Holly’s “death.” Her plan may be working, as Eric shared a kiss with Sarah (Linsey Godfrey.) Spoilers indicate that Eric senses something is off with “Nicole.”

Brady may also soon figure out something is up because of her behavior. Nicole tried to seduce him after Holly’s funeral. She became frustrated and told him to “forget about Holly,” something the real Nicole would never say. Brady rejected her attempt at seduction… for now.

Two Actresses Playing Nicole on Days of Our Lives

Stacy Haiduk returns to DOOL in the scenes where Kristen has the mask and wig off. Arianne Zucker plays the scenes when Kristen is wearing the “Nicole” mask.

Stacy took over the role of Kristen DiMera in 2018 from Eileen Davidson. Eileen appeared on both Days of Our Lives and Young & the Restless at various times since 2015. She was also a Housewife for two seasons on Bravo’s Real Housewives of Beverly Hills.

Maggie (Suzanne Rogers) fell off the wagon because of despair over granddaughter Holly’s “death.” Next week she is shocked when she sees Kristen without the mask on. Will Brady believe Maggie when she tells him Kristen is back in town? Brady has been helping Maggie cover up the fact that she’s drinking again.

Tune in to Days of Our Lives weekdays on NBC to see how long Kristen can keep up the charade of being “Nicole.”

Does ‘Better Call Saul’ Season 5 Have A Netflix Release Date?
Frank Fritz Termination: Will ‘American Pickers’ Be Cancelled?
‘My 600-Lb. Life:’ Can Dolly Martinez Get Her Life Back?
Shock Footage: ‘My Killer Body with K. Michelle’ Shows Graphic Surgical Damage
Waldrop Girls Have Christmas Again At The Least Likely Place