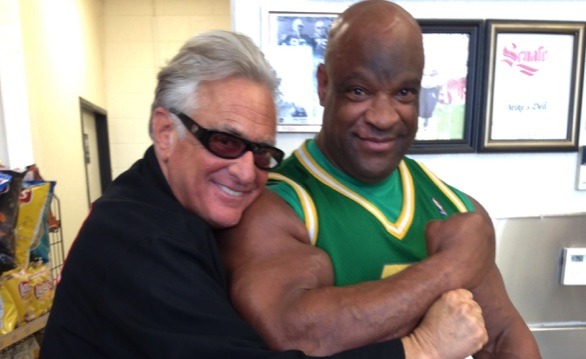 Storage Wars fans are clamoring for more details on Barry Weiss since his serious motorcycle accident on Wednesday afternoon in Los Feliz, California. Barry was riding his bike alongside his pal Jamie, who has now gone to social media to reveal more about his condition, as well as Barry’s. What is the latest news on Barry Weiss?

On Wednesday, Barry Weiss and his friend Jamie were riding motorcycles in the Los Feliz area at about 2:30 in the afternoon. According to Jamie, a SUV pulled out of a parking space and in front of the two riders. Both Barry and Jamie lost road and suffered a “massive” hit, before falling to the ground. Jamie shared a video of the vehicle and the two bikes smashed on the ground. There is an ambulance, and Jamie explains that his friend Barry was seriously injured, but the video does not show the 60-year-old reality star.

According to Jamie’s Instagram page, he revealed that he suffered a broken knee, elbow and wrist, which sounds awful. But, he admitted that Barry’s injuries were far worse. Barry’s injuries include “serious chest and leg trauma.” Jamie also asked that people pray for Barry’s recovery.

“Not a good day at the office, a serious crash today with my friend Barry Weiss when a car pulled out directly in front of us and took our road away. I got lucky, only a broken knee, elbow and wrist, Barry is much worse and has serious chest and leg trauma 👎 Please send your prays to Barry 🙏”

In another post, Jamie thanked his bike helmet for saving his neck and head, despite a “serious collision.” Unlike Barry, it does not appear that Jamie needed to be treated in ICU.

Where Has Barry Weiss Been?

Although there were a lot of rumors that “The Collector” had died, nothing could have been further from the truth. Barry loved being on Storage Wars, but shared in a Dutch interview that he wanted to leave the show on a high note. Although he is a fan favorite, he was only on the show the first four seasons. He also starred in his own show, Barry’d Treasure, where he continued to search for unique antiques.

Before his accident, his focus was on his grandson Jack, who is now around 5, and his impressive antique car collection. Barry has said that he would return to television if it could be about antique cars. Although his godson Jesse James has shared that Barry and Jesse’s dad had supplied antiques for the TGI Fridays restaurant chain, Barry has contended that he has always been in the fruit and vegetable business started by his grandfather.

Barry fans who have been waiting for him to star in a new show will have to suspend this dream. Now, Barry has to focus on recovering his health after this very serious motorcycle accident.

Are you shocked about Barry’s accident? Please share your favorite Storage Wars Barry episodes. Also share your well wishes for Barry, as he recovers, in the comments below. Storage Wars just finished airing Season 12. Storage Wars fans are waiting for news about Season 13.