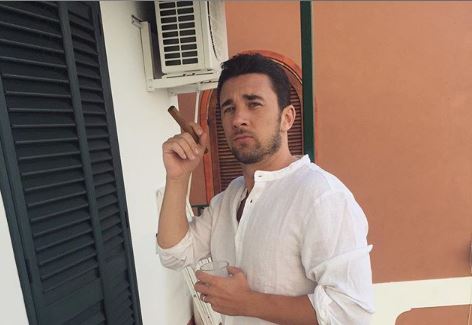 It’s been a whirlwind few months for Chad DiMera (Billy Flynn) and Abigail Deveraux (Kate Mansi) on Days of Our Lives. In rapid succession, they discovered Abigail’s new daughter was Chad’s, broke up, dealt with Abby’s father, Jack Deveraux (Matthew Ashford) coming back from the dead and their daughter being kidnapped.

Actress Kate Mansi took over the role of Abigail Deveraux in 2010 and left the show in 2016. The role of Abigail was recast with Marci Miller until late 2018 when Kate reprised the role, presumably to wrap up the Chad and Abby storyline. It looks like that time is here.

Billy Flynn was tapped to play Chad DiMera in 2014 after the previous actor (Casey Deidrick) was let go. The couple — in all their various incarnation — have been romantically linked since 2011. They have two children together, though Abby originally thought someone else was the father each time she was pregnant. Awkward!

Last week on Days of Our Lives, Chad was able to rescue Charlotte from the kidnapper, Jordan Ridgeway (Chrishell Stause Hartley.) This week, he reunites Charlotte to her mother and then asks Abby to marry him. Given how Chad rescued their daughter and bribed Jack into a family dinner, Abby forgives him for locking her up in a mental institution and agrees to marry him. This will be the couple’s 3rd marriage.

Would it be a soap wedding if no one interrupted? Surprisingly, that person is neither Stefan (Abby’s recent ex-husband, played by Tyler Christopher) or Ben.

The person who interrupts Chad and Abby’s latest attempt at wedding bliss is none other than her father — Jack Deveraux.  Given that Jack has total amnesia and doesn’t even remember his daughter, it’s anyone’s guess as to the purpose of this interruption. Tune in to Days of Our Lives on NBC this week to find out if Jack regains a memory or if he’s just being Jack.

Whatever the reason for Jack’s interruption, we know that the wedding happens and Chad and Abby leave town together on Thursday, February 21st.

Where Does This Leave Stefan?

As previously mentioned, Abby was married to Stefan just a few months ago. Stefan is in love with Abby’s alter-ego Gabby. Abby quickly married him to prevent then-husband Chad from committing her to a mental institution. This was after Gabi Hernandez (Camila Banus) convinced Chad that the Gabby alter had resurfaced.

Without Abby OR Gabby, Stefan is left without a love interest.  Stefan has been sharing a lot of screen time with Chloe (Nadia Bjorlin) recently. This has lead to speculation that Stefan and Chloe will hook up.  However, soap fans know that Nadia was recently let go from the show and will be leaving the canvas soon.

Other rumors indicate that somehow Stefan will be paired with Gabi. The actor who plays Stefan, Tyler Christopher, will be replaced with Brandon Barash sometime in 2019, but the airdates for the switch haven’t been revealed yet. Days tapes six months in advance of the television airing, so given that the casting change was announced in October, it could be April or later until we see Brandon’s debut in the role.

Tyler initially left for a temporarily for a personal reason but then decided he didn’t want to come back. There is speculation that he might be returning to his role as Nikolas Cassadine on General Hospital. Everyone assumes Nikolas is dead, but a body has never been located.