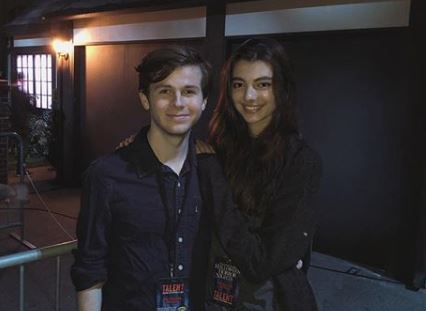 Chandler Riggs will be joining A Million Little Things for (at least) two episodes. He will be portraying PJ, a character who is described as someone who “has had some dark days.” He will have a chance encounter with Rome and the two characters will discover they have quite a bit in common.

Both Rome and PJ will be highly impacted in various ways by their meeting, although neither one of them will be quick about realizing how meaningful it was. That’s an interesting detail to note within PJ’s character description since it’s not clear how the conversation (assuming it’s just a conversation) will end up affecting their lives in the bigger picture.

Right now it’s anyone’s guess as to when and how Riggs will appear on the show. The season one finale is February 28, 2019, so he has to arrive by February 21st if not sooner.

Since TV Line exclusively broke the news yesterday, fans have already started guessing how PJ could fit into the show. Perhaps Regina had a teenage pregnancy and her mother made her give him up for adoption. This would answer Regina’s secret and also the root of why the mother and daughter don’t get along. Others suggest PJ might be Sophie Dixon’s boyfriend. Of course, there are fans that think this could be Jon’s love child with another woman, especially with Barbara Morgan.

Many will recognize Riggs as one of the original stars of The Walking Dead. He played Carl Grimes starting in 2010 until he was killed off last year during Season 8. Riggs was out of work for a full year and tweeted how excited he is to be on A Million Little Things.

SUPER excited to announce that i'll be joining @AMillionABC for a couple of episodes (and maybe more??)! the cast & crew is so incredible, and i absolutely love the series. i encourage everyone to check it out this thursday night on abc!!https://t.co/5N2l7vbYbq

Are you excited to see Chandler Riggs on AMLT? Were you a fan of Carl Grimes?

Are you ready for tonight’s episode where answers to why Jon did what he did are supposed to be revealed?