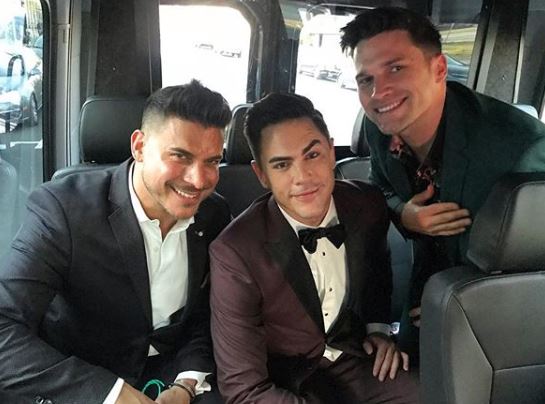 The Vanderpump Rules stars Tom Schwartz and Tom Sandoval have already started their business Tom Tom off with a bang. The bar has been nominated for the “Best Bar in Los Angeles” award by the Los Angeles Travel Magazine. How exciting is this? The two Tom’s feel absolutely honored, considering the bar has just recently opened.  Fans are dying to visit the new bar famously made by fan-favorite cast members. Will you ever make it by Tom Tom?

Tom Schwartz let his social media following know that they received a nomination by posting on his Instagram a picture of his wife, who is also on the show, Katie Maloney, holding a drink from the famous bar. Schwartz also made it known that he’d be having half a shot to celebrate. Many fans were so pumped to see the accomplishment the two have made in their business already! Lots of fans were commenting on his Instagram post very inspirational things to help them stay motivated. Tom Tom has a good chance of winning with the fan base they already have on social media and also fans, friends, and family from the show.

It’s been a little over a week since @tomtom opened and I picked up my business partner for the first time on a motorcycle/sidecar to go to our opening in our matching suits… what a dream it’s been… he handed me sexy pair of @diffeyewear glasses to match his, I’m wearing the “Kota” he’s wearing the “Scout” check em out! I love that for every pair of glasses @diffeyewear sells, they donate a pair of reading glasses to someone in need! Use my code SANDOVAL25 & save $25 and pick some up! Can’t wait to see u at TomTom!!! #diffpartner

As fans know Sandoval is a master bartender, all of his cast members rave about all of his drinks and how talented Tom really is. He states “It’s always a constant work in process, but it’s so enjoyable. We’re always an open book, we’re always sponges soaking in new information, new gimmicks, new cutting edge cocktails,” the reality tv star added. “Obviously our cocktail program is very strong right now, but we’re always open to new suggestions, new ideas, and new cutting edge techniques. The food is great. We have elevated bar food.” Fans are ecstatic to see the opening of the bar on the seventh and current season of Vanderpump Rules.

At one point it looked like Tom Tom might never happen. These two had to win Lisa over and that isn’t easy, but they did it somehow. It is great that it is turning out to be a success.

Will any of their personal friends work at Tom Tom? Obviously, James Kennedy won’t be working for them, considering Lisa Vanderpump just fired him from SUR. We’ve even seen James’ mom come down and talk to Lisa about the issue. Just starting off the season with a few episodes, there is already so much drama, but did fans expect any less from this cast? Keep updated with all of the drama on Bravo on Monday nights.