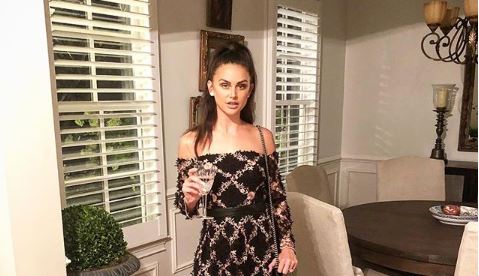 Fans of Vanderpump Rules know that a lot of the cast have a drinking problem. There’s not one episode where someone isn’t drunk. Is the cast influenced by the audience to keep a partying reputation? Viewers sure hope not. A fan favorite cast member Lala Kent has decided to become sober and she’s been very successful so far, alongside her fiance Randall Emmett.

On December 17 Lala revealed she was 56 days sober. She really just wanted to turn her life around and become a better, healthier person in general. Kent went downhill after her father passed away earlier this year, she turned to drinking to fix her problems. The reality show star revealed,  “Drinking for me was medication instead of celebration. Instead of going and talking to somebody about losing someone extremely important to you, we turn to things to medicate. I just want to make sure that I put my voice out there to say, reach out to someone, reach out to a grief counselor, partner with someone who can make you feel like you’re not by yourself and going completely insane. Because when you lose someone,” she told Cosmopolitan.

She also shared how her lover helped her through the situation, “My fiancé always says I have this sixth sense where I know when things have gotten to a point where they need to change, so I can’t really pinpoint one incident,” she told Cosmo. “When I really came to the conclusion that I am in that zone of having a problem, I just said enough’s enough. I picked up the phone, I called this sponsor that had been recommended to me. It’s the best decision of my whole life.”

Things are going great for Lala Kent right now. She has the man of her dreams and is engaged to him. Lala and Randell Emmett are planning a wedding. They were even on an episode of Flipping Out recently getting their house fixed up. It looks like they are the perfect couple and are going to make it. Maybe being sober will also be great for their relationship. Lala is becoming sober because she feels like it is the best decision for her.

Vanderpump Rules viewers have seen a lot of people go downhill and quick. On the latest episode, we saw James Kennedy get out of control from alcohol, even though there’s nothing new there. His girlfriend Raquel even admitted that she wanted him to stop drinking. What will alcohol do to the rest of the cast members? Are any of the others up for a stop? Is James Kennedy ready for a change that could save his relationship? Stayed tuned and watch this season of Vanderpump Rules on Bravo.