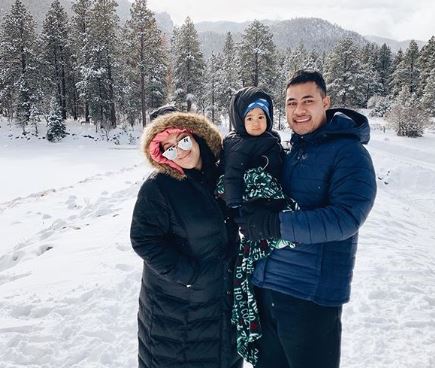 Tonight on the big 90 Day Fiance reunion Kalani was on stage along with her husband Asuelu. They were part of the reunion show, but her sister was not on stage. Instead, she was backstage with Kalani and Asuelu’s little boy. She then brought him on stage.

Kalani was seen on the 90 Day Fiance reunion show holding her little boy. She then pulled the top of her dress down and started breastfeeding her child. This surprised a lot of people but impressed others. Oliver was hungry and his mom just took care of feeding him. It also seemed like she didn’t think twice about it.

The thing to remember is that TLC could have gotten upset or just left this off the show. Instead, they embraced it and showed Kalani breastfeeding her son. This came with mixed reviews, but it didn’t seem to bother Kalani or Asuelu at all. They just kept on talking like nothing had even changed.

What did fans have to say about it?

Twitter went crazy about the fact that Kalani breastfed on the show. Some people were okay with it and others were not happy. Regardless, Kalani wasn’t the one who chose to put that part on the air.  Here are some of the tweets from during the show that share exactly what people thought.

I understand why there's so many people against public breastfeeding. Put a blanket over y'all. #90DayFiance

Way to go #kalani. No cover breastfeeding on TV. You just stood up for so many women. Thanks.

I’m apologizing in advance to the breastfeeding moms out there but once the kid has teeth it’s time to get off the teat. #justmyopinion #90dayFiance

As you can see this comes with a lot of mixed feelings. It will be great to see what Kalani has to say about it, though. She obviously did what she thought was right at the time. They had probably been filming for a long time that day. Her son is still breastfeeding and she is pregnant right now. The 90 Day Fiance star admitted to being a bit emotional considering that she is pregnant at this time.

Are you shocked that Kalani breastfed her son on 90 Day Fiance today? Share your thoughts in the comments. Also, don’t miss 90 Day Fiance when it returns to TLC with new episodes.