Duggar family fans and critics have been keeping a close eye on them as the results from Josh’s child pornography trial came out on Thursday, December 9. The tension has been building since his arrest in April. Now, we have the verdict, and chaos is ensuing

The Duggars have maintained a neutral (and sometimes positive) appearance at the courthouse. But a source recently spoke to Katie Joy of Without a Crystal Ball and told a different story.

The Duggar family experiences chaos amid Josh’s trial and verdict.

In a new social media post on Thursday, Katie gave some insight into what’s going on at the Duggar family’s home right now. She writes, “There is complete chaos in the family due to Jim Bob Duggar lying on the witness stand. Privately, the boys are furious & have angrily confronted Jim Bob for lying, protecting Josh & not protecting their sisters.”

Katie says that Jim Bob Duggar has placed the blame on his daughter, Jill Dillard. She writes, “He’s telling everyone that Jill lied & that she never woke up & punched Josh while he molested her. He is continuing to allegedly slander Jill to everyone in the family according to my source.” 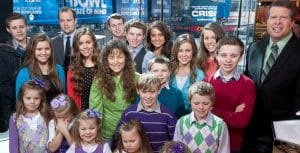 As previously reported, Joy-Anna and Austin Forsyth went to Texas for Thanksgiving instead of spending the day with the Duggars. Katie’s source says this is because the couple is on poor terms with Anna, Josh’s wife.

According to the source, Austin previously confronted Anna over her decision to protect Josh. Other Duggar siblings are unhappy with this as well because she has continued to stand by Josh.

The source predicts that more chaos and feuding will be happening soon. So, fans and critics should watch closely to see what happens next.

So, does it surprise you that the Duggar family is not on good terms right now? Do you have any suspicions about what might be coming next? Let us know your thoughts in the comments section below. Come back to TV Shows Ace for more Duggar news.