Anna Duggar has continued to show up to her husband Josh’s trial this week after he allegedly received and possessed child pornography (or child sexual abuse images). Though she hasn’t spoken out herself yet, sources reveal that she believes he’s innocent.

For months, fans have begged Anna to leave her husband after his arrest. They hope she will protect her children instead of standing by her man. However, Anna continues to stay loyal to him, even amid his child pornography trial.

It was previously reported that Anna was not in the room when explicit content was shown to the jury. Sources said she rushed out of the room before she was able to see it.

Now, a new report reveals that Anna was in the room for a short time while the content was visible and being described. So, she caught a glimpse of the disgusting images her husband is being accused of having on his devices. 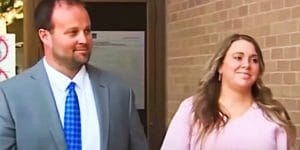 The Ashley’s Reality Roundup has a reporter at the trial. In a new article, the news outlet reports:

“Some of the disturbing images were visible to Anna and Derick and others in the courtroom. Although the CSA images were only supposed to be shown to the jury, judge and attorneys (with the TV screens to the general public turned off during those times), the prosecutor left his computer screen on for a short time, showing several storyboards of the CSA images and videos in question. Anna, who was seated right behind where the prosecutor’s screen had a view of the images.”

The outlet adds, “Anna remained stonefaced, even as the graphic descriptions were read and the CSA images were briefly visible to her.”

Several other members, including Joy-Anna and Austin Forsyth, were in the room as well. The Ashley’s Reality Roundup that the couple “looked sad.” Some of the jurors were looking away from the screens or crying in response to the images. So, Anna’s response comes as a surprise. After all, she has seven children at home, some of them being the same ages as the kids shown or described.

So, does Anna Duggar’s reaction to the images shock you? What do you expect to happen as a result of Josh Duggar’s trial? Let us know your thoughts in the comments section below. Come back to TV Shows Ace for the latest news about the Duggar family.