What are Jill Dillard’s tattoo plans? The former Counting On star is continuing to stand up and rebel against her strict upbringing. Read on to get the details about Jill’s recent revelation.

As Duggar fans know, Jill’s parents, Jim Bob and Michelle Duggar raised her in a very conservative environment. Slowly but surely, Jill has questioned their beliefs and discovered what she believes in herself. Over the past few years, she’s made some major changes in how she lives her life.

As we previously reported, Jill has been using a Sharpie to write scripture verses on her hand or wrist. This comes as a surprise because none of the Duggar family members are known to have tattoos. In a new Instagram post, Jill proved that she’s still writing verses on her skin.

The former TLC star recently inked 1 Peter 5:7 on her hand, which reads, “Cast all your anxiety on Him because He cares for you.”

In her post, she added, “Sometimes I write Bible verses in sharpie on my hand to remind me of truths from scripture.”

After she shared these photos, fans began commenting and asking if she would be getting a tattoo in the future. They think the verses look great written on her hand. One of her friends commented, “You should get that tattooed!!”

In response, Jill thanked her friend and added, “maybe I will one day.” She also used a winky face, which could be a sign she’s hinting at her future. 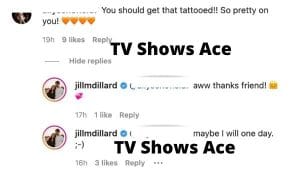 Jill Dillard InstagramIn another comment, someone wrote, “I’m seeing a tattoo in your future.” Jill responded, “Possibly…have to decide which one, where and build up courage…might take me a while lol.”

So, it doesn’t look like she has too many concrete plans for her tattoo, but she seems to be interested. However, some fans are pointing out that she’s ignoring what the bible says about tattoos. Many fans are referencing Leviticus 19:28, which says:

“You shall not make any cuts on your body for the dead or tattoo yourselves: I am the Lord.”

Could this mean that Jill is straying from her faith? It’s possible. However, not all Christians still follow this rule.