How old was former Counting On star Justin Duggar when he and his now-wife Claire Spivey got engaged? Fans have been asking this question for almost a year now, despite the fact that the pair has since tied the knot and is settling into married life.

For those who don’t know, Justin is one of Jim Bob and Michelle Duggar’s 19 kids. He married Claire in February 2021. Now, it looks like the two of them are living in Texas, which is where she’s from. Much of the Duggar family has remained in Arkansas with a couple of exceptions.

When Justin and Claire got engaged, fans thought it was interesting that they shared the news the day after his 18th birthday. Some thought he might have popped the question on his birthday, while others speculated that he wanted to keep things under wraps until he was “legal.” In Texas and Arkansas, the legal age to get married is 18. And, an engagement is different and they did wait until he was 18 to tie the knot. 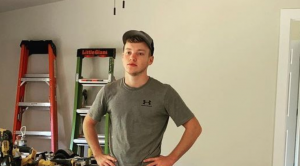 Was Justin Duggar Under 18 When He Got Engaged?

In a new Instagram post, Claire wrote, “Hard to believe it has been one year since our engagement! Such a whirlwind day filled with joy! 💞” She shared an Instagram Reel, which features several photos from the couple’s relationship and marriage. This post was shared on November 5, 2021, though the couple didn’t announce their engagement until November 16, 2020.

To announce their engagement last year, Claire shared a few photos and a caption. She wrote, “After 14 months of courting, I am thrilled beyond words to be engaged to @justinsamduggar!!! 💍 So looking forward to see what the Lord holds for us during this next chapter of life. Thank you everyone for your support and enthusiasm!! 😃”

So, based on the timing of the two posts, it looks like the pair kept their engagement a secret for over a week. Then, they announced it the day after Justin turned 18. Fans and critics think this was done intentionally, likely to avoid criticism and backlash.

On Reddit, Duggar Snarks are pointing out that it’s weird the couple got engaged at such a young age. One user points out, “Claire just posted on instagram that they were engaged a year ago today, proving that the teen groom wasn’t even of legal age when he dropped to his knee.”

So, did you think that Justin Duggar popped the question before his 18th birthday? Do you think it’s a big deal? Let us know in the comments section below.

For the latest Duggar family news, come back to TV Shows Ace.