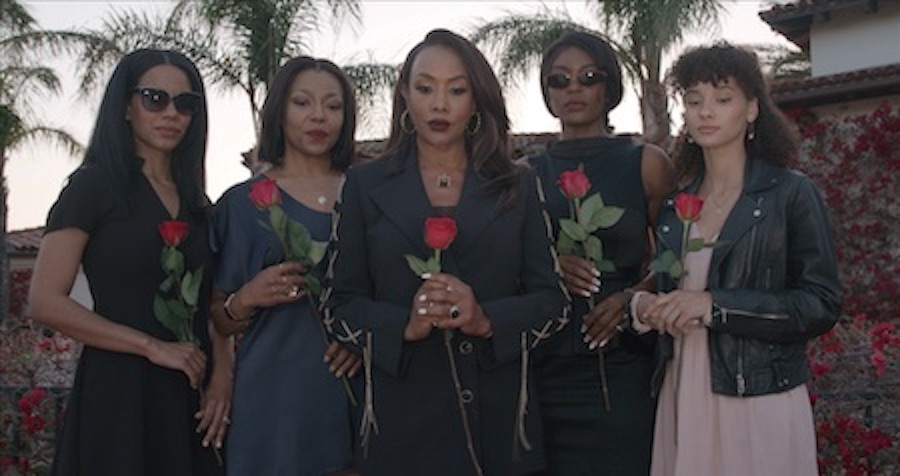 Summer is just beginning to sizzle with Lifetime Move Network’s new mini-series, Keeping Up With The Joneses. This LMN three-episode family saga is about the Joneses, a prominent, well-to-do family in the town of Pacific Hills. The three episodes will air for three consecutive nights. This is the first original series for LMN.

This is what we know about LMN’s latest in the Wrong Franchise series.

What Is Lifetime Movie Network’s Keeping Up With The Joneses About?

What is Lifetime Movie Network’s latest movie, Keeping Up With The Joneses: The Wrong Family about? According to the LMN press release, after patriarch Theodore Jones dies, Robin Jones (Fox) becomes the matriarch of a wealthy family dynasty in Pacific Hills. Jones, along with her four stepdaughters are invincible. However, each of Robin’s step-daughters has unique personalities and quirks.

There’s cold and calculating CEO, Pam (Thompson). Next is Carrie (Carter), the family’s conscience who oversees its charitable endeavors. Don’t forget party-girl Kayla (Sterling). Lastly, there is high schooler Tara (Aivaliotis) who may be the most Machiavellian of all.

When threatened, the Joneses will stop at nothing to protect their business and family. They may be opposites, but when someone tries to battle the Joneses with threats, blackmail, and murder, they bond together and deal with the worst possible adversity.

Moreover, you never mess with the Joneses.

Cool Down With A Summer Of Santas

July is a favorite time to indulge in some Its A Wonderful Lifetime movies. They are now available 24/7 with Summer of Santas. What classic 2020 movies should you check out?

Be sure to start with The Christmas Setup. This is the first Lifetime Christmas movie with a romance between the same gender leads. Moreover, it stars real-life married couple Ben Lewis (Arrow) and Blake Lee (Parks and Recreation). In addition, Fran Drescher (The Nanny) adds a lot of laughs and mischief. Lastly, Ellen Wong (Glow) is also a lead.

How about checking out another groundbreaking movie,  A Sugar And Spice Holiday. This stars Jacky Lai (V-Wars) and Tony Giroux (Motherland: Fort Salem) in the first Christmas-themed movie with all all-Asian cast. Everyone loves Dear Christmas. This stars the dream team of Melissa Joan Hart (Melissa and Joey) and Jason Priestley (90210).

When Can You Watch Lifetime Movie Networks Keeping Up With The Joneses?

You can watch the premiere of Lifetime Movie Network’s first episode of Keeping Up With The Joneses: The Wrong Family on Thursday, July 8 at 8 p.m. Eastern on LMN. Then for the next consecutive Thursdays, July 15, and July 22, catch the second and third episodes. In addition, each episode is two hours long and full of thrills, chills, and utter extravagance.