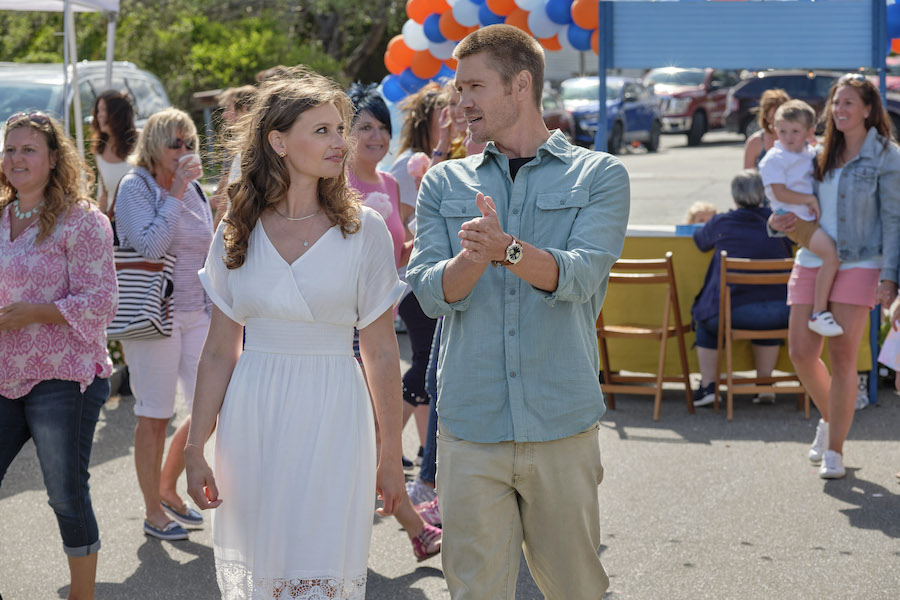 Ready to dive into the latest from Hallmark?

What Is Hallmark’s Sand Dollar Cove About?

According to the Hallmark press release, Elli (Michalka) is a real estate development project manager. Her company has sent her to the quaint, seaside Connecticut town of Sand Dollar Cove. She is there to acquire the beachfront property they have chosen for their new resort.

Meanwhile, Brody (Murray), the charming local who holds the deed, wants to make sure the town’s beloved pier remains intact. This is a place where a lot of locals have beautiful memories.

The two begin to spend a lot of time together. An undeniable connection between Elli and Brody grows. That is, after there is some tension, then a major spark.

Elli feels torn. She is trying to figure out a way to make this deal work. She needs a miracle.

However, the more Elli gets to know this charming town of Sand Dollar, the more her mind works. Ellie feels invested in figuring out a workable solution. She is now inspired to create a design that could make everyone happy.

This is a design not just for business, but also for love.

Sand Dollar Cove is based on the book by Nancy Naigle.

When Can You Watch Hallmark’s Sand Dollar Cove?

Don’t forget to hop onto Twitter on the night of the premiere. Join the Hallmark cast, as well as other fans, and tweet during the movie.

Where Was Sand Dollar Cove Filmed?

Where did Hallmark film Sand Dollar Cove? According to The Day, the movie was filmed in Southeastern Connecticut. Moreover, they filmed in Stonington.

Hallmark is kicking off their 2021 Summer Nights on Saturday, June 5, at 9 p.m. Eastern. This first movie is a Hawaiian rom-com called You Had Me At Aloha. Moreover, this stars WCTH fan favorites, Pascale Hutton and Kavan Smith.

Next, catch The Baker’s Son on Saturday, June 12, at 9 p.m. Eastern. This is the magical story of a baker who doesn’t see that the love he wants is right there in front of him. This stars Eloise Mumford and Brant Daugherty.

The third Hallmark Summer Nights movie is Her Pen Pal. This premieres on Saturday, June 19, at 9 p.m., Eastern. This movie takes place in Paris. In addition, Mallory Jansen and Joshua Sasse star.

Moreover, don’t Forget to catch the premiere of Sand Dollar Cove, on Saturday, June 26, at 9 p.m. Eastern, on the Hallmark Channel.