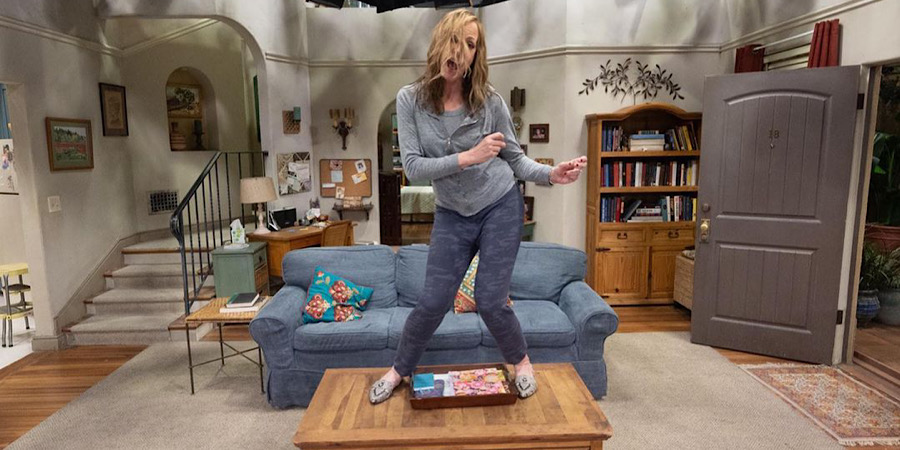 Last week on Mom, Jill discovered she was pregnant. She and Andy had only been back together a few months so she was nervous to tell him. This all occurred at the Napa Valley Community Hero Awards where Marjorie was being honored. Bonnie was set to introduce her and it made Bonnie realize just how impactful her sponsor had been. In the end, Marjorie learned it was her once-estranged son who had nominated her. Jill also learned Andy was beyond thrilled to become a father. Now, the long-running series must say goodbye.

A Newcomer and Sadness Enters Mom

While at a meeting, Bonnie notices a newcomer, Shannon grunting and making rude comments. When she abruptly exits, Bonnie chases her out. She offers to buy her a coffee yet after the girl accepts, she bolts down the street in the rain. Bonnie chases after her and eventually, Shannon acquiesces to come to coffee at The Bistro. All she heard was the ladies telling happy stories. Jill is pregnant, Tammy is in a great relationship. Shannon does not think they could understand losing custody or going to jail.

Bonnie did not see Christy for years and both Tammy and Majorie served time. In terms of being homeless, Marjorie had been there, as well. With the exception of Marjorie, they all had mother problems so she was in great company. Bonnie put her number in her phone if she ever felt the need to drink or to use. When Bonnie arrived home, Adam is very somber so she thinks he is leaving her.

He had been to the doctor and they did a scan. They found something on his lung and he needs to go for a follow-up the next day. She panics but will be there with him every step of the way. At 10 pm, she cannot sleep so she calls Marjorie. She consoles Bonnie who gets a call from Jill and Andy who announce they are getting married the next day. Shannon calls in because her mom wants money for drugs. Bonnie gets back to Marjorie but her cat threw up on the bed. Tammy bursts into Marjorie’s room to share the news about Jill but Bonnie already knows. There’s a lot going on in so many directions.

Adam’s Lungs and A Wedding

At the doctor, all Bonnie can focus on is the dirty fish tank. When they leave to head to the wedding, Adam is in shock. Bonnie is surprisingly calm. He has lung cancer but it is early and they caught it super soon. Next up is a biopsy and she believes he will be fine.

At the town hall, Bonnie does not say anything because it is Jill’s day.  Tammy sees the judge who sentenced her and cannot wait to let him know how great she is doing. Everyone asks Jill if she will take Andy’s name but it’s Pepper. The ladies laugh because she is actually marrying Sargent Pepper. Unfortunately, Shannon and her mom are in the back seat of a cop car so Bonnie calls in a favor. The women come into the chapel fighting like dogs but it is reminiscent of the original Bonnie and Christy. No one cares because it is Jill and Andy’s big day.

At the meeting, Bonnie has told the ladies (minus Jill) about Adam and they remind her they are there every step of the way. Jill soon comes in and asks why they are hugging so Bonnie says it is because they are so happy for her. They take a seat and Bonnie goes on to share about everything she is grateful for. She has come so far in eight years and as she speaks, Shannon and her mom come in. Bonnie realizes she has become somewhat selfless and finally loves the person she is. It ends with Wendy having the last word, asking who would like to share. What did you think of the Mom series finale? Let us know in the comments!