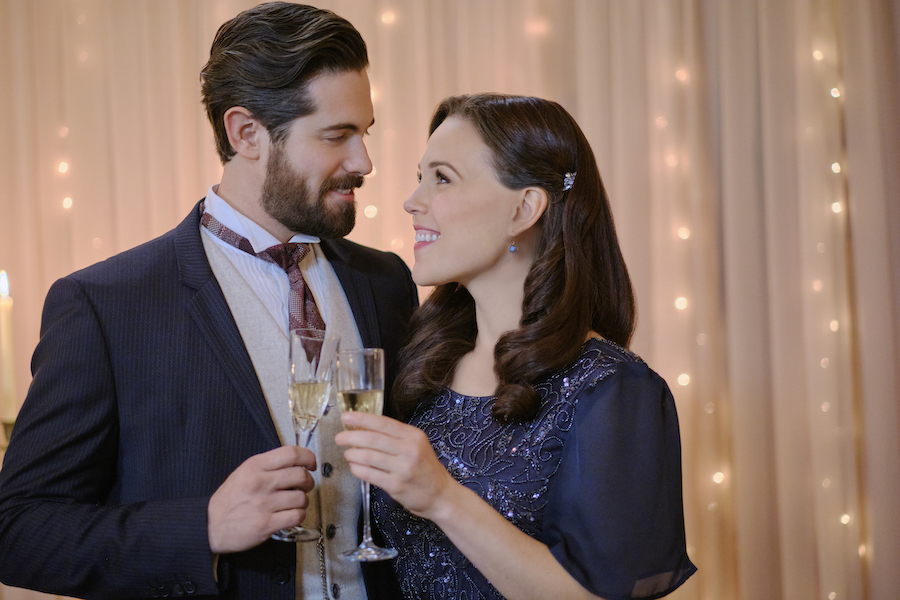 The When Calls The Heart love triangle is over. Actors Chris McNally and Kevin McGarry portrayed Lucas Bouchard and Mountie Nathan Grant, vying for Elizabeth Thatcher Thornton’s (Erin Krakow) hand. Now, she made her choice.

However, there are spoilers below that could affect anyone who did not watch the Season 8 finale episode. You have your warning!

Elizabeth has made her choice and it is Lucas! Chris McNally is the lucky actor that gets to play Lucas Bouchard. Yet, it didn’t start that way. Speaking to the Bubbly Sesh podcast, he explained that he auditioned for both roles of Lucas and Nathan. However, the method of auditioning started differently for each role.

When Chris auditioned for the role of the saloon owner, he did a live audition. He told the Sesh, “I didn’t think it went very well at all. Then Chris elaborated, “It was one of those ones where you leave going, ‘Man, I really screwed that one up. I wish I could roll back the clock and try again.’”

Unfortunately, it looked like that door was slammed shut. However, he had a second chance to play a Hope Valley character. He had made an audition tape for the character of Mountie Nathan Grant. That tape was sent from LA to Canada, to his Canadian representation.

The tape impressed the WCTH showrunners. His next step was a chemistry read with Erin Krakow. After he tried out for Nathan, they asked him to hang around and try out for Lucas. This time, Chris got it right. “That time, I felt great about the read.” He felt redeemed. “I felt like I did what I wanted to do; what I should have done the first time.”

Is Chris McNally dating a Hallmark co-star? Back in 2018, Chris and Julie Gonzalo (Jingle Bell Bride) co-starred together in the Hallmark movie Sweetest Heart. According to ET,  he is dating Gonzalo. However, unlike Kevin McGarry who recently went Instagram official with When Calls The Heart co-star, Kayla Wallace, McNally is super private.

However, the shy actor admits that “If my girlfriend tells me I’m handsome, that’ll make me feel good.”

On Monday, Chris McNally and Erin Krakow were on the Bubbly Sesh talking about Elizabeth’s choice. They also spoke about next season. Erin is excited about the Canfields and looks forward to more stories.

Chris pipped in that he had worked with Viv Leacock, who portrays Joseph Canfield, early in his career. He was on Supernatural, and he had a role that did not have any speaking. He kept trying to say a word, and they had to keep cutting the action. An actor gets more money if they speak in a role than if they remain silent.

Chris admits his hands were sweaty and he was very nervous. However, Viv helped him get through this situation early in McNally’s career, and now they are in the same show. Chris cannot be more appreciative of how kind and helpful Viv was to the young actor.

When Chris McNally was recently on the Deck The Hallmark podcast, the Vancouver native shared how he got into acting. Although he had an agent as a child, he didn’t do so well. He only practiced acting at auditions. That was not a good game plan.

After high school was done, he went for a semester and realized how much he loved acting. He quit all of his classes except for painting and drawing. Chris loves to be artistic. While he was in acting school, he bartended and continues to do so at home. His latest creation is a whisky raspberry jam sour. One of his dreams is to open a boutique cocktail bar that is “low key.” Sounds like he is perfect for playing Lucas.

Yet, Chris did reveal he suffers from serious anxiety. This is something he deals with when auditioning for roles in his chosen profession.

Chris McNally Did Not Know Elizabeth’s Choice Until Much Later

Grumpy Dan from Deck The Hallmark asked Chris McNally how soon he found out Elizabeth’s choice. Although Chris did not reveal her choice, he did share that at the beginning of Season 8, there seemed to be a game plan. He then revealed that this plan seemed to go back and forth a few times.

However, it was just before shooting the final scenes did he find out who Elizabeth chose. Amazingly, he kept a very straight face and joked about Kevin being the choice, but of course, Elizabeth chose Lucas.

Hearties, do you know all you need to know about When Calls The Heart star Kevin McNally?