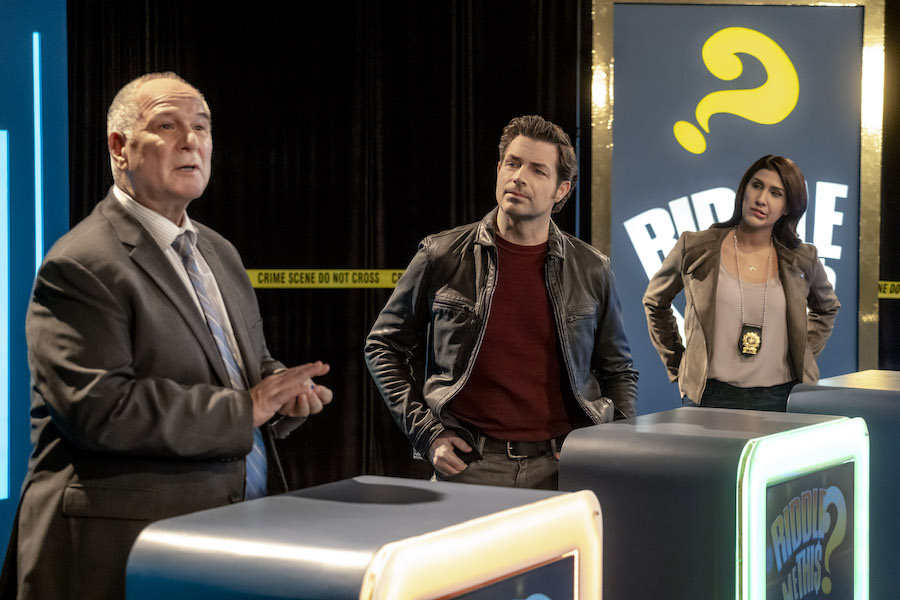 What Is Hallmark’s Crossword Mysteries: Riddle Me Dead About?

Lacey and Brennan are back. What is Hallmark’s Crossword Mysteries: Riddle Me Dead all about? According to the Hallmark press release, “Tess (Chabert) is invited as a special clue-reader on her Aunt Candace’s (Niven) favorite game show, Riddle Me This.”

However, things take an unexpected twist when the show’s host is mysteriously killed. When it turns out that multiple crew members including Hunter (Cor), Tess’s ex, had motive and access, is this a crime too puzzling for even Tess to solve?

When Can You Watch Hallmark’s Crossword Mysteries: Riddle Me Dead?

Many believe that Lacey Chabert and Brennan Elliott are considered the Tracy and Hepburn of the Hallmark Channel. Why is this relationship so great. Lacey was asked this question when she was interviewed on the Build Channel back in 2019.

She responded, “It just works. We’re real friends in real life. We trust each other, which is hard to come by. And, our families are friends. When you trust your scene partner, it makes you a little more willing to try stuff, and it’s like it’s safe to, you know, improv.” She continued, “We collaborate on this and try this little thing. If it works, it’s awesome. If it doesn’t you keep moving on.”

What drives her crazy? Well, “he loves to improv.” Lacey admits that she does too. But, Brennan takes it next level, because “he just has to have the last word.” That means that the two never stop a scene. “And then, he has to throw something else.” Then, the two get into trouble for running the scene over. Filming Hallmark movies are very precise, and this must mess with a lot of the timing of commercials and scenes. But, fans love the two of them!

Be sure to check out the premiere of Hallmark’s Crossword Mysteries: Riddle Me Dead on April 11, at 7 p.m. Eastern, on the Hallmark Channel.

Matt & Amy Roloff Plus Trent Johnston All In One Place, Why?
‘One Piece’: How Many Seasons Are On Netflix?
Ryan & Trista Sutter Share Struggles, How Lyme Disease Took Over Their Life
Ethan Plath Throws Subtle Shade In His Mother’s Direction
Travis Barker’s Hospitalization Health Update Explained