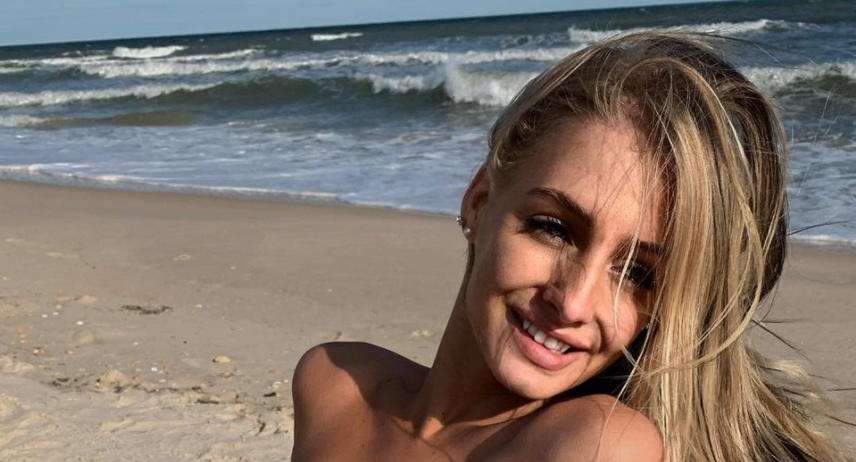 Welcome to Plathville fans know that the Plath family adheres to strict, Christian values. The kids live rather sheltered lives, and they’re limited in many areas. For example, they aren’t allowed to eat a lot of sugar, have never tried a Coke, and must dress modestly. They also don’t have access to technology and are homeschooled. This is their parents’ way of “protecting them” from the world around them. In the show’s first two seasons, Moriah Plath is navigating her tricky relationship with her parents and trying to figure out what she personally believes.

Because of Moriah’s journey, which has been documented on the show, she’s sometimes referred to as a rebel. She’s doing her own thing and finding out what works best for her. Along the way, she may upset her parents though. On the show, this caused more drama between them. In a new social media post on Sunday, Moriah showed that she’s confident in herself and her beliefs.

Moriah Plath models on the beach

On Sunday, Moriah went to the beach with her boyfriend, Max Kallschmidt. The pair enjoyed their time on the beach, and they had a little photo shoot while they were there. In her post, Moriah includes a handful of pictures of herself modeling swimsuits on the beach. She’s rocking bikinis, which isn’t what her family typically wears to the beach. In the past, the family has gone to the beach fully clothed. You can see their old photos here.

Since Moriah is doing her own thing now, she’s started wearing bikinis and other clothing that doesn’t match what her parents would like her to wear. According to the family, they don’t really use social media, so it’s possible that Kim and Barry won’t see these photos anyway.

Moriah says that Max took the photos of her. She also writes, “Suns out buns out!😉 I can’t tell y’all how happy I am that spring is here… I’m just not a cold weather person lol! Summers on its way and if any of y’all are looking for cute swimsuits checkout @sunnycoclothing I’ve got some of my favorite swimsuits from them!🥰”

You can see all of Moriah’s new photos here.

So, are you proud of Moriah Plath for figuring out who she is? Let us know your thoughts in the comments below.

For the latest on the Welcome to Plathville family, check back with TV Shows Ace.