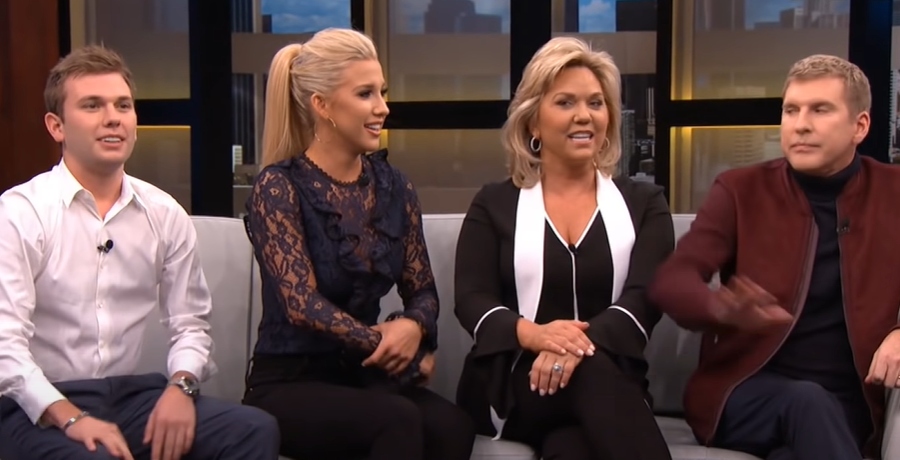 As TV Shows Ace previously reports, Julie Chrisley is not Todd Chrisley’s first wife. Additionally, his children have two different mothers. Read on to find out more about Todd’s five kids and how the siblings interact with each other.

What we know about Todd Chrisley’s first marriage

Todd Chrisley wed July in May of 1996. Together they have three kids: Chase, Savannah, and Grayson. They all appear on Chrisley Knows Best regularly. Along with Todd’s mother, Nanny Fay. Notably, Todd has two other children, Lindsie and Kyle, from his first marriage to Teresa Terry.

According to The List, it seems like Todd Chrisley and Teresa Terry’s relationship was a stereotypical high school sweetheart situation. The couple met in high school, and shortly after, Terry had their first child, Lindsie. Just two years later, Todd’s oldest son, Kyle was born in 1991.

After Todd and Teresa split, Lindsie and Kyle primarily lived with Todd. And some sources say that Julie eventually adopts Lindsie. If that’s the case, that means Todd’s first wife gave up legal rights to Lindsie. It’s uncertain if that is the case for Kyle. According to an interview Terry gave Daily Mail, Todd kept the kids because “he could provide more materially.” Terry gives a shocking statement to one news outlet. “Most likely we wouldn’t have married if I hadn’t been pregnant but we did and it was a big deal.”

Sadly, Lindsie Chrisley is currently estranged from the rest of her family. According to US Weekly, this is because people allege that Lindsie accused her dad, Todd of attempted extortion. Julie Chrisley even tells the outlet in January that they don’t communicate with Todd’s oldest kid. “We don’t have any correspondence with her. I wish her well, and you know, that’s it,” says Todd’s wife.

Additionally, there are rumors that in the wake of the fallout Lindsie’s dad and half-brother made some raunchy claims about her. US Weekly reports that she files a police report with claims that they “were going to release [a] sex tape involving her.” Consequently, this is about the same time that rumors were flying around that Lindsie was having affairs with The Bachelorette’s Robby Hayes and Josh Murray.

Even with all of this drama, Lindsie Chrisley commits to not speaking about her family. This may seem especially hard to do since she co-hosts Coffee Convos with Teen Mom star Kailyn Lowry. The only time of note, that Lindsie goes against this is when she calls out internet troll wishing ill will on her father after his COVID diagnosis. She says, “I don’t want anything bad to happen to my father.”

Chrisley Knows Best fans may remember that for the longest time, Todd Chrisley and his oldest son, Kyle were estranged from each other. When the show premieres in 2014, Kyle struggles with addiction. However, he tries to turn his life around for his daughter Chloe. Kyle is so far removed from the family at this point, that many people often speculate that Chloe is actually Chase or Savannah’s child.

For many years, the father and son throw jabs at each other. Often on social media for the world to see. Todd Chrisley claims Kyle has bi-polar disorder and “he will struggle for life”. While Kyle claims (via The Daily Mail) Todd’s only interest in Chloe is “having a mixed-race child and getting her and all that would be good for his demographic.”

Heartwarmingly, Todd and Kyle turn over a new leaf around the same time as all of the Chrisley tax evasion drama. In a Facebook post, Kyle shines a light on the situation. He goes on to explain what happens when he goes to his dad and offers an apology. “I went to my dad with an apology. His words were ‘I love you always, and you are forgiven’ and just like that, I was welcomed back into his life with open arms. I will be forever grateful for his love [and] and graciousness.”

Savannah Chrisley is Todd’s third child. Much like her father, she has quite the entrepreneurial spirit. She recently found great success in her make-up line Sassy and acquired her real estate license. Oftentimes, Savannah makes headlines about her love life. The most recent event to make headlines is her breakup from longtime boyfriend, ex-hockey player, and real estate agent Nic Kerdiles.

Undoubtedly, Savannah Chrisley is a daddy’s girl. They’ve always got each other’s backs. There isn’t anything they wouldn’t do for each other.

Todd’s fourth kid is Chase. Oftentimes, Chase is described as stubborn and mischievous. On Chrisley Knows Best, he always seems to be up to something. Chase and Todd have a lot of things in common. For example their sense of humor. However, they often disagree. Luckily, they’re always quick to reconcile. Not only that, but Chrisley Knows Best fans know that Chase and Savannah are best friends.

Lastly, Grayson Chrisley is the baby of the Chrisley siblings. While he may be in his teenage years now, that doesn’t mean much when it comes to how other members of the family treat him. Fans get to watch Grayson grow up in front of them. Consequently, they characterize him as “the most charming and gets away with just about everything.” Surprisingly, Grayson is close with Savannah and Chase despite their nine-plus-year age gap.

Let us know your thoughts on the Chrisley kids. Come back to TV Shows Ace for more Chrisley Knows Best news.