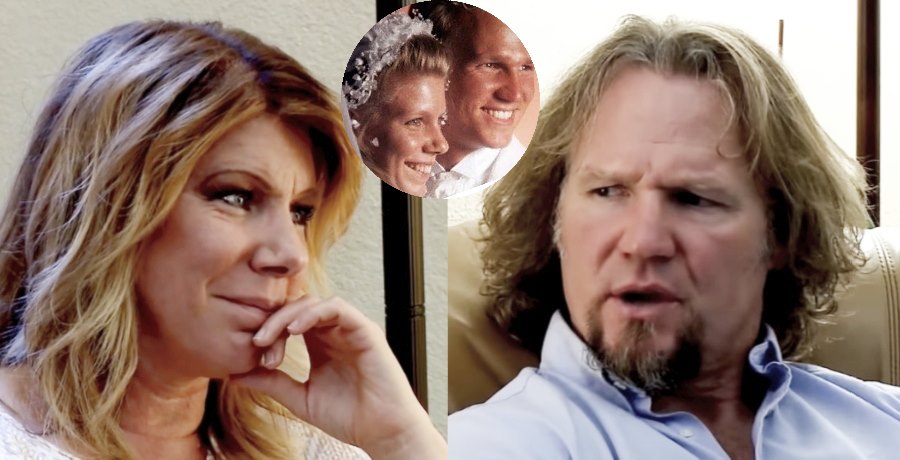 Sister Wives fans are all too familiar with the highs and lows of Kody and Meri’s relationship. While things seem to be great for the polygamist family in the hit TLC show, along the way something led to the couple seeming estranged. Consequently, there is a lot of speculation about the causes of tension between Kody and his first wife. However, it seems like the story depends on who is speaking.

Luckily for fans, US Weekly chronicles Kody and Meri’s relationship through the good, the bad, and the ugly. Ultimately, it seems that the source of their information comes from the family’s memoir Becoming Sister Wives: The Story of an Unconventional Marriage. In the book, Kody explains how he fell for Meri.

The beginning of Sister Wives Kody and Meri Brown

After being engaged for less than six months, the pair tied the knot in 1990. Heartwarmingly, the Sister Wives patriarch shares his feelings about Meri at the time. “Meri was so cute and sweet when I met her that I had a hard time suppressing my hopelessly romantic nature,” writes Kody in the memoir.

While each subsequent wife goes on to give Kody a lot of children, Meri struggles. Kody and Meri have one daughter together, Mariah. Heartbreakingly, Meri opens up about the miscarriage she suffers during her second pregnancy at 10 weeks. “I completely assumed that aft I had Mariah, it would be very easy for me to conceive again,” shares Meri. Emotionally, she continues sharing intimate details about the devastating time in her life.  She explains that it was “years of a rollercoaster.” Eventually, the couple “backed off”. And Meri says, “I was so frustrated and so angry. I didn’t understand why, after another 12 years of trying, and then, it was just taken away from us.” Ultimately, she shares that she “didn’t understand that” and it is “really hard.”

Just three years later, Janelle and Kody get “spiritually married”. Interestingly, enough Janelle used to be married to Meri’s brother. Not only that, but Janelle’s mother is married to Kody’s father. So Sister Wives husband and wife are also step-siblings. Since they got married, Janelle and Kody have had six children. Madison and Savanah are their daughters and Logan, Hunter, Garrison, and Gabriel are their sons.

Nearly a year later, Kody Brown takes on another “spiritual marriage” with Christine. Christine and Kody also have six children. They have one son, Paedon, and five daughters Aspyn, Mykelti, Gwendlyn, Ysabel, and Truely. Notably, fans get to watch Truely grow up on Sister Wives since one episode of the show features her birth.

And a fourth wife comes to the Sister Wives family

For nearly 15 years, it was just the three wives. However, Season 1 of Sister Wives features the Brown family introducing a fourth wife, Robyn. According to fans, that’s when a lot of the drama between Kody and Meri comes to the surface. Be it coincidental or not, things only seem to get worse when Kody and Meri get divorced in 2014. In a statement to US Weekly, Kody says, “We have chosen to legally restructure our family.” This decision is made so that Kody can legally adopt Robyn’s kids from a previous relationship. In his statement, he goes on to say, “We made this decision together as a family. We are grateful to our family, friends, and fans for all their love and support.”

Sister Wives fans are familiar with Meri’s catfish scandal. According to US Weekly, this all goes down just two years after Kody and Meri’s divorce. Sadly, this causes a lot of tension between multiple members of the Brown family. Meri explains her initial feelings on Sister Wives she says, “At first it was kind of cool to just have that companionship, I guess.” Kody gives his thoughts on the situation and mentions feeling “lost.” He also says, “Meri and I were struggling enough. It was very hard to communicate.”

More drama for Kody and Meri

Additionally, Sister Wives fans see even more drama unfold in Season 13 of the series. Meri begins pursuing her dream of running a bed and breakfast. And Kody isn’t supportive, he calls her efforts “self-indulgent”. Meri holds on to hope that the family would come around. She says in an episode, “I know they support it, and I think that if I needed help with [the inn] they would be right there.”

Sadly, things just seem to keep going to a dark place for the original Sister Wives couple. Over the holidays of 2019, “a sweet little mom” Meri knows suffers a miscarriage of a little boy. Consequently, this seems to take Meri back to hers. However, come 2020, it doesn’t seem like the two are ready to throw in the towel. Sister Wives producers cover them in couple’s therapy.

While Meri goes on to share a sweet Instagram post about her love for Kody, it doesn’t seem to last long. She even goes on to infer that she prefers dogs to Kody. However, Kody routinely says they are “in a dark place” and working on their relationship.

Do you think Sister Wives Kody and Meri Brown will ever be happy in their marriage again? Let us know in the comment section below. Come back to TV Shows Ace for more news about your favorite TLC stars.