Bringing Up Bates star Alyssa Bates Webster recently became a mom of four. Her fourth daughter with John Webster arrived in February. They named the baby girl Maci Jo. She joins three older sisters, Zoey Joy, 2, Lexi Mae, 4, and Allie Jane, 5. From what Alyssa and John have shared, it seems like the family is adjusting well to their newest arrival, but Alyssa isn’t afraid to admit that things aren’t always easy.

Since the baby’s arrival, her parents have been sharing lots of adorable pictures of her. Naturally, Bates fans adore all of the new pictures that are being shared. They think that the baby looks like her big sister Allie.

On Instagram, she recently shared a collection of photos from the family’s latest photo shoot. It appears that the family had their pictures taken after the baby arrived. There are pictures of all four of the girls, just the baby, and the whole family.

Alyssa wrote sweet captions on the photos, saying that she’s “utterly obsessed” with her new daughter and that she’s “in love” with the new family photos too. She tagged the photographer in the posts as well. 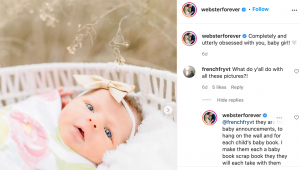 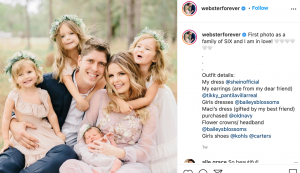 You can see all of the photos from Alyssa and her little family here.

Alyssa Bates has a great idea for the baby photos

When Alyssa shared the new pictures from her daughter’s newborn photo shoot, one fan asked, “What do y’all do with all these pictures?!”

In response, Alyssa explains, “They are for baby announcements, to hang on the wall and for each child’s baby book. I make them each a baby book scrap book they they will each take with them when they move out from birth to one year old.”

Though none of her followers responded to the comment, they are liking it. It’s received a lot of attention, so it seems like fans think that it’s a great idea. Maybe some of them will even use the same idea themselves.

On social media, over the years, Alyssa has shared plenty of pictures of her other daughters as they’ve grown up. So, she has plenty of baby pictures to use in their baby books.

So, what do you think of the new photos of Maci Jo? Do you like the idea that Alyssa Bates came up with? Let us know in the comments below.