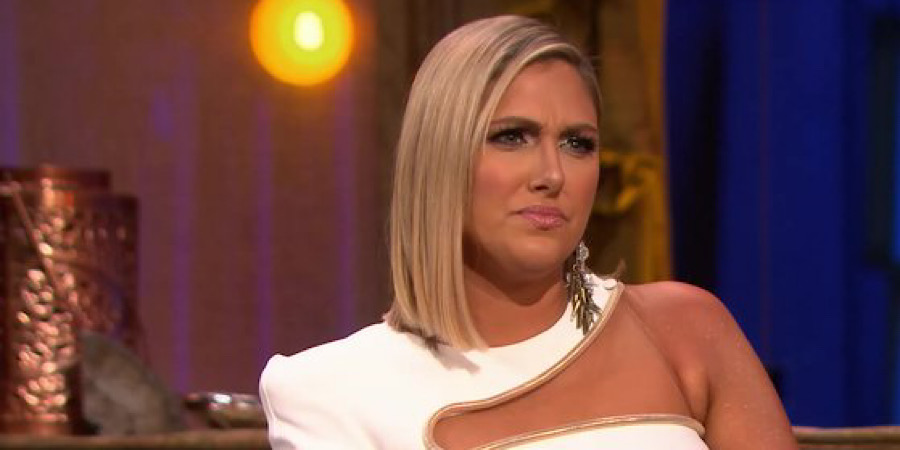 Last week on Part One of the RHOC reunion, Kelly’s inappropriate Covid comments are addressed. Andy Cohen even mentions how viewers called for her to be fired. At the same time, Braunwyn got into it with several of the ladies until it ended with Shannon claiming Braunwyn offered her teen daughter drugs. When she was drinking, she approached fourteen-year-old Stella and told her to call her if she wanted the “good stuff.” Tonight, the reunion concludes and is even more explosive.

Braunwyn does not remember offering Shannon’s daughter drugs at all. Emily feels she is truly owning this bad moment. Shannon is forgiving her while Kelly just cannot stop shaming her. She just wants Braunwyn to hurt more than she already does and it is clear. Onto another housewife who’s hurt a lot- Gina. She has struggled with her ex-husband, Matt after he harassed and abused her. He will go to court and she did not want to take her kids away from their father. But, ultimately, she would do what needed to be done.

In the middle of it all, Gina was able to finally find a hairstyle that worked for her and a new love, Travis. He has taken care of her and made her feel special. As for Matt, they spent Thanksgiving together and are able to co-parent amazingly well. She has yet to give her victim impact statement because of Covid but will. It is the only way for her to heal. As of now, her ex is only looking at house arrest so that gives her some peace for her kids. As they get ready to go to break, Braunwyn breaks down and apologizes to Shannon. She accepts again but still seems very blase. Emily and Gina have to console her as she begins to hyperventilate.

Kelly and Shannon Are Besties and Kelly Is Inappropriate…Again!

After many years of not liking each other, Kelly and Shannon are now good friends. Mainly because their partners are very close. Who would have thunk it? When asked if any of the ladies were invited to Kelly and Rick’s intimate wedding- initially no. At the last minute, Gina and Emily were invited but could not scramble to make it. Was it bad for her to have a wedding during a pandemic? Somewhat because everyone should have been tested and safe. The ‘Drunk Wives Matter’ hat she wore at her bridal shower? Was that wrong? It was a bit tone deaf in light of the BLM movement. Even Gina cannot listen without making faces.

Braunwyn is called out for being photographed going to marches. The other wives feel they did their part under the radar. It’s a hot mess. Kelly eventually yells that she is black and everyone is baffled. Now, she is preaching about all she has done for the LGBTQ community and African-American community. Andy Cohen calls her out and reminds her she has not walked through life as a black person. Braunwyn is now looked at because she feels she does not have anyone she can talk to about political issues. Emily takes offense to this because she went to a drag show with her and her son.

Braunwyn Cannot Trust the RHOC Ladies and Elizabeth Opens Up

The women are confused by Braunwyn because she loves her husband and wants to stay with him. However, she is a lesbian. By the same token, she is not comfortable with the women. It makes sense. Kelly has made some crude comments towards her about her lesbianism. At the beach party, she offered her tuna and said she must be familiar with the smell. Braunwyn looks around and notes this is why she cannot talk to them. Then, Elizabeth reveals she is bisexual but not practicing. This throws the ladies off completely. Braunwyn actually thought she was gay when she met her and they ask Elizabeth if she was not interested. Elizabeth did not act on anything because Braunwyn had a husband and kids. But, she has no interest in finding a new women to bring home.

Opening up was what the housewives wanted Elizabeth to do all season. In Lake Arrowhead, she confessed she was raised in a cult. Her mother got an 18-wheeler, packed them up and drove away. It left her with severe PTSD and luckily, she has found a great therapist. She never expected she share this on television but wanted to help other women in this situation.

When Andy announces Sean is coming out, Shannon has no idea who that is. Comical. It is time to reflect on Braunwyn and Sean’s Season 15 relationship. Once she got sober, they became like roommates and quarantine exacerbated it. Braunwyn always knew she was a lesbian but she wanted the perfect family and life but has never been physically attracted to her husband. Sean admits he was relieved when she admitted she was gay. This meant it was nothing he could change but just who Braunwyn was. He did go out with someone and she was in his bed. This crushed Braunwyn and that’s when they started therapy.

They do want to stay married and he wants to find someone who adores him. The ladies are seeing the boundaries follow what Braunwyn wants. She gets what she wants and as long as she is satisfied, everything is okay. It comes up how she hit him twice. Sean has been her enabler a lot and the women think he is a saint. All he wants is for his kids to be happy and to spend time with them. Sean emphasizes Braunwyn is a hands-on mother they just do not post about it. They have been honest with their older kids and their younger ones know nothing. He is just happy his wife is so much happier.

The season has ended and Kelly has been open she will not return if Braunwyn does. Who would you prefer to come back? What did you think of this season? Let us know in the comments. And don’t miss the return of RHONJ February 17th only on Bravo.

Horrified Fans Can’t Believe What Kylie Jenner Is Wearing
Megan Fox Shocks With Dramatic New Hair
What To Expect From ‘I Am Shauna Rae’ Season 2
Tim Burton Stunned ‘Wednesday’ Creators With His Decision
‘The View’ Guest Insults Sara Haines, Called Out By Fans