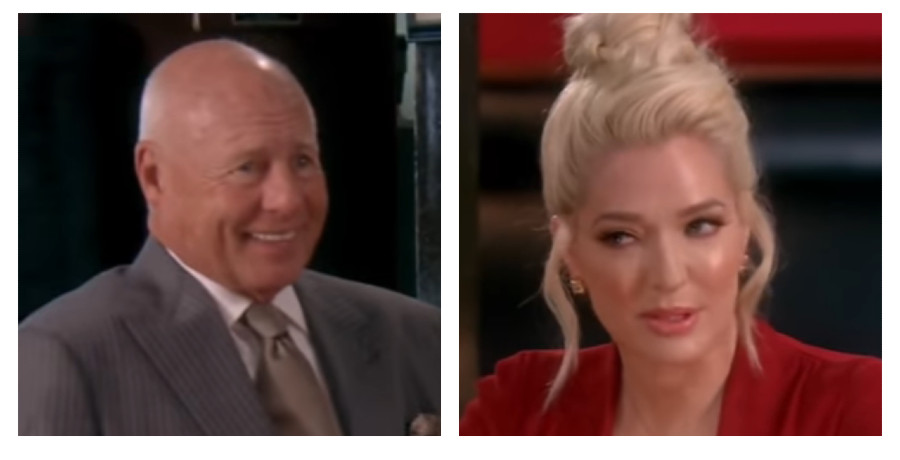 The story of Tom Girardi and Erika Jayne’s split gets stranger and stranger. The Real Housewives of Beverly Hills star filed for a divorce in November of last year. Fans were completely shocked because there weren’t any rumors of trouble in paradise. In fact, Erika spent much of Season 10 of the show telling newbie Garcelle Beauvais how strong her marriage was.

The RHOBH  star and her famous lawyer hubby had been married for over 21 years. That kind of longevity is rare in any reality star’s marriage, but the former couple also had a 33-year age difference to overcome.

Rumors that infidelity played a role in their split was all but confirmed when Erika Jayne put her ex’s alleged mistress on blast on Instagram. The “Pretty Mess” singer posted alleged screenshots between her former husband and an L.A.-area judge. She quickly deleted the post, but several of her followers snagged screenshots.

Aside from that slip-up, Erika Jayne hasn’t addressed the split. Nor has she addressed the shocking allegations of embezzlement facing her and her ex.

Did Tom Girardi Steal Money From the Clients?

The Girardis have been on the receiving end of several lawsuits, mostly over money. While Tom Girardi is no stranger to courts – he is a lawyer after all – he’s been on the wrong side of the table in recent years.

A new lawsuit with shocking allegations was filed a little more than a month after Erika Jayne filed for divorce. The lawsuit claims that Tom Girardi used money from a settlement to pay for their lavish lifestyle. The settlement was earmarked for plane crash victims.

While the contents of the lawsuit are appalling, some find the timing of the divorce very convenient. Many RHOBH fans wonder if the divorce is a ruse to protect Erika Jayne from the consequences of the alleged fraud.

New reports of Tom Girardi’s mental state are also getting a side-eye from skeptics.

E! reports that Erika Jayne’s ex is suffering from memory loss. The paperwork his brother filed alleges that Tom Girardi’s “short-term memory is severely compromised.” Furthermore, the papers state that Tom Girardi “lives alone and cannot care for himself.”

The case won’t go before a judge until June 9. At that time, Tom Girardi must convince a judge that he is of sound mind and can handle his own finances.

Erika Jayne seems unbothered by all of this. However, she seems increasingly bothered by her followers trolling her on Instagram. Earlier this week, she posted a thirst trap photo on her Instagram with a caption practically BEGGING for her fans to come at her.

In the glam photo, Erika shows off her derriere and her long legs made longer with a stretch app. In the caption, she lets fans know she purposely left comments on just for them. She wrote, “I thought about disabling comments, but you all are so gullible I just can’t . 🤷🏼‍♀️”

While some fans defended Erika Jayne from the trolls, the majority called her out for yet another tone-deaf post.

Do you think Tom Girardi is faking memory loss? Let us know your thoughts in the comments down below.

Bravo has yet to announce when RHOBH will return. Follow us on Facebook so you don’t miss out on all the latest reality TV news.