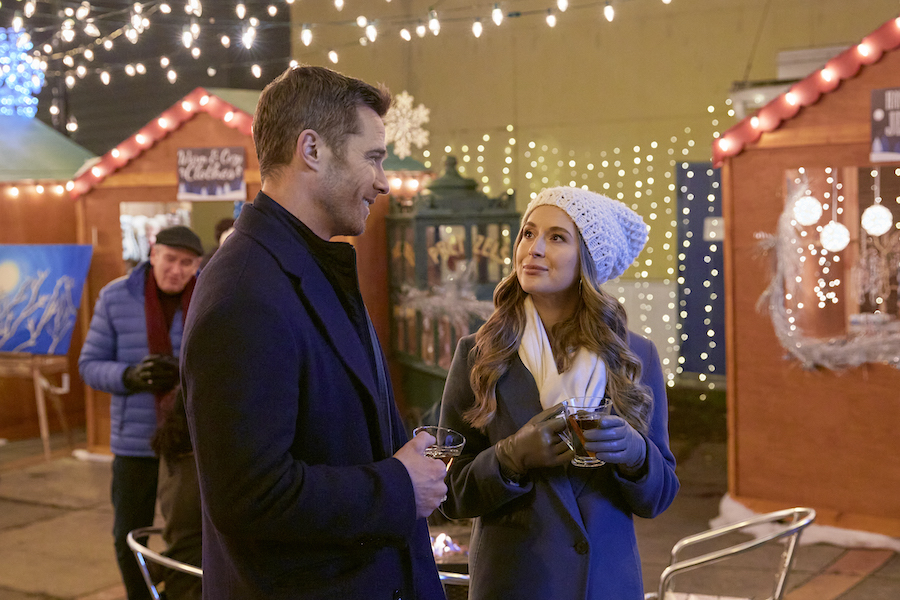 Christmas is nearly over, but fans are already looking into the next series of Winterfest movies that Hallmark has now rebranded New Year New Movies. The first movie out of the gate is Taking A Shot At Love. This stars Luke Macfarlane (Chateau Christmas) and Alexa PenaVega (Picture Perfect Mysteries).

What can be more wintery than a hockey player romance? Let’s see what this is all about!

What Is Hallmark’s Taking A Shot At Love About?

According to the Hallmark press release, Jenna (PenaVega) is a ballet teacher. Formerly a professional dancer, she teaches children in her small Connecticut town. Unfortunately, enrollment is a bit down and her rent has just gone up.

Thankfully, Jenna’s sports agent cousin has an unusual request that could help her stay solvent. He wants her to help out his NHL client Ryan “Coop” Cooper (Macfarlane).

Coop, plays for the New York Rangers. He has a nagging injury that has kept him off of the ice. Despite physical therapy and even alternative medicine like acupuncture, he is still unable to play.

Ironically, this is the same injury that ended Jenna’s dance career years ago. So, Ryan moves into her guest house, as he prepares to halfheartedly try this last resort approach.

But, getting Coop, or any hockey play for that matter, on board with the out of the box “ballet- as-therapy plan” is her first challenge. But, somehow, she manages to convince him that this will really help him get back to doing what he loves. Best of all, it works.

Outside of the ballet studio, Jenna and Ryan become friends. They share their hopes, dreams and even their insecurities. They enjoy the local Winterfest Arts Fair. This is something a hockey player normally doesn’t have time to attend, as winter festivals are in the mist of hockey season.

There is even time for some friendly competition. On a particularly night, when heavy snowfall causes a power outage, the two enjoy playing games with neighbors and friends. They are attracted to each other, but they are on totally different paths. He plays for the world famous New York Rangers, and she lives in a small Connecticut town, teaching youngsters to dance. There is little intersection between their worlds.

When Can You Watch Hallmark’s Taking A Shot At Love?

Hallmark Has transformed their Winterfest movies into New Year New Movies. This includes the highly anticipated A New Year’s Resolution. This movie stars Michael Rady and Aimee Teegarden, in a movie about saying “Yes!” to everything. This movie will premiere on Saturday, January 9, at 9 p.m. Eastern.

Don’t forget to catch the premiere of Taking A Shot At Love, on Saturday, January 2, at 9 p.m. Eastern, on the Hallmark Channel.