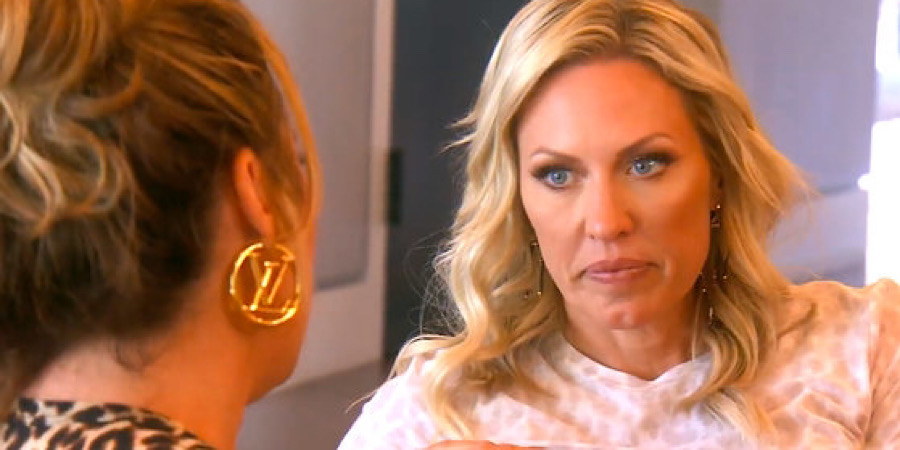 Last week on RHOC, the ladies ventured to Palm Springs. It was all about Sean and Braunwyn renewing their vows. Hours before the latest episode, Braunwyn Windham-Burke officially came out. Some fans are questioning the vow renewal, in general. But, the show must go on.

While in Palm Springs, Kelly organizes a trip to the Frey House for her, Elizabeth, and Braunwyn. It’s a historic home and she says she’s a huge history buff. She is in to architecture and tries to act all cultural but, following her on social media, this is comical. They have to ring a gong to get in. Flashback to her knocking Shannon over the head last year at the spa.

Of course, Kelly sees a bunch of windows and immediately comments about her and fiance, Rick walking around naked. It is time to gossip while lounging at the historic home. Kelly tells Elizabeth the women question her marriage and divorce. They find her to not be truthful and inconsistent.

Over with Shannon, Emily, and Gina, they are on a hike, gossiping about Elizabeth so it is coming full circle. Elizabeth is new this season, introduced by Kelly. She has a high-profile ex and lives a plush lifestyle. To be honest, she is not that interesting. Only thing really gets to me is she has had a boyfriend for years that she won’t sleep with until she is divorced.

She does mention Shannon may have a drinking problem. This bothers Braunwyn, who is getting sober. It is a personal struggle and a sensitive subject. But, it is not the first time someone has mentioned Shannon’s abuse of alcohol on the show. Oh well; back to the OC.

Gina is still going through a lot with her ex, Matt. There is gossip that he only shows up to their kids events for show. She says he is a good father but there is still their court case. He was aggressive with her so she has to deal with that. Gina’s live-in boyfriend, Travis has been super supportive but he appears to be over it. Who wants to deal with cray exes?

In therapy, Braunwyn is candid about her insecurities, away from group therapy. She admits she’s always been anxious. Braunwyn also says she needs to learn how to be an adult. She confesses to had a miscarriage when they moved to DC many years ago. It led her to drink for five days in the closet; she was ultimately admitted to the psych ward. Her husband, Sean is now going to meetings. He has been protecting her since she was 18 as an enabler. But, their house has everything so she really does not have to leave and deal with life.

Covid has arrived but the ladies are still business as usual. Shannon is helping her eldest daughter get ready for the debutante ball. She does admit her senior year of high school is basically ruined. Braunwyn is taking her son, Jake to get makeup now that he is into drag. She admires his confidence and willing to be himself. Elizabeth is working out as she has lost 30 pounds. She has 20 days until she goes to trial for her divorce and is trying to get into fighting shape. Her biggest issue, aside from losing weight, is the fact he ladies are gossiping about her divorce. She does not like they don’t feel the divorce adds up. But, it seems Elizabeth has trust issues with women, as well as her ex. Bigger problems are coming.

Shannon’s daughters still want to go to their dad’s home despite Covid starting to get worse. Her boyfriend, John’s daughter is at Costco and everything is sold out. Gina and Emily are shopping and Gina mentions Shannon is panicking about Covid. They are laughing about it. Just wait, ladies. Emily mentions there are no kids at her son’s school. Should she keep them home? No one knows what to do. Shannon does not know if she should use the paper towels; she says it is like out of the movies. John is more worried about her health because she has permanent scarring of the lungs.

Kelly gets a call from a friend in another part of Cali, saying Coronavirus is a mess. She says it has not hit the OC bad  yet. But, a big EXPO, where her Positive Beverage was to be featured, was cancelled. She is mad they lost a deposit. One of her partners comes by to tell her Target is sold out and they are losing money everyday. Kelly is worried because she needs to save up for health insurance and send Jolie to college. She jokes she has Rick Leventhal as a back-up.

Shannon calls Kelly, panicking she cannot find meat anywhere. Kelly compares it to the flu and nothing more; to Shannon, who is compromised, it is so much worse. Gina phones her parents in New York; her kids school has been shut down for a month. She admits she dropped the ball on this. Gina also says Matt will find out his punishment soon. Their dynamic is going to change for sure.

Braunwyn’s meetings are starting to get cancelled and the fear of being trapped is getting to her. But, it’s about to get worse. The RHOC has halted production for safety reasons. Coming up on the season: Sean moves out; Braunwyn has a girlfriend; some people test positive; and everyone is divided. Don’t miss the RHOC every Wednesday at 9pm only on Bravo.