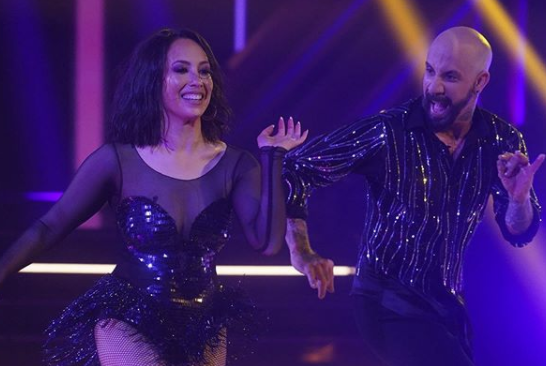 Are you excited for Halloween? Even though the festivities may look a little different this year, there are still plenty of things to get excited about. Dancing With The Stars has a spooky Halloween special planned for next Monday night. You can tune in and see your favorite performers disguised as famous villains!

Inquisitr recently dropped some hints about what fans can expect next week.

Many Competitors Will Dance The Paso Doble

To start off, a lot of competitors will tackle the Paso Doble this week. It’s quite an intense style but works well if executed correctly. Derek Hough and Hayley Erbert pulled off an outstanding Paso Doble on Monday’s episode.

Still not over this! If you missed @derekhough and @hayley.erbert's performance last night, watch it here. 🔥 #DWTS

Kaitlyn Bristowe and Artem Chigvintsev currently top the leader board and will dance the Paso Doble to “Disturbia” by Rihanna. Rumor has it that their costumes will resemble Cruella de Vil. That will definitely be something to see!

Chrishell Stause and Gleb Savchenko will also be channeling their inner Disney villains. Their Paso Doble will be to “In the Air Tonight” by VonLichten and they will be dressed as characters from Maleficent.

Jeannie Mai and Brandon Armstrong received excellent scores this week and will also tackle the Paso Doble this coming Monday. Their dance will be to Nelly Furtado’s “Maneater,” with a look inspired by Hannibal Lecter himself.

Tangos Will Also Be Popular This Week

Justina Machado and Sasha Farber are very much in it to win it. On Monday, they will dance the Tango to “Take Me to Church” by MILCK dressed as characters from Stephen King’s Carrie. Do you think they will drop a bucket of fake blood on someone?

AJ McLean and Cheryl Burke are keeping in line with the horror movie theme. Their Tango will be to “Psycho” by the Intermezzo Orchestra. You probably guessed already that their theme is Psycho.

Skai Jackson and Alan Bersten didn’t perform so well last week, so they really need to bring it on Monday night. They will attempt the Argentine Tango to Billie Eilish’s “Everything I Wanted” in the style of the film, Bride of Chucky.

Nelly and Daniella Karagach will also have an Argentine Tango. Their dance is to “Can’t Feel My Face” by The Weeknd and go for a look based on Freddy Krueger from Nightmare on Elm Street.

A Few More Spooky Routines To Finish Off The Night

Meanwhile, Monica Aldama and Val Chmerkovskiy are going to dance a Jazz routine this time around. They will perform to “Fever” by Beyoncé with looks inspired by Nurse Ratched from One Flew Over the Cuckoo’s Nest. Netflix has its own take on the story in a new show called Ratched.

Johnny Weir and Britt Stewart were in the bottom two last week, so they’ll really have to prove themselves on Monday. They will have dance the Viennese Waltz to “Creep” by Vincent/Kimberly Nichole. They’re going for a vampiric look with costumes from the classic film, Dracula.

Which routine are you looking forward to the most? Tune in to Dancing With The Stars on Monday night to see how it all plays out.