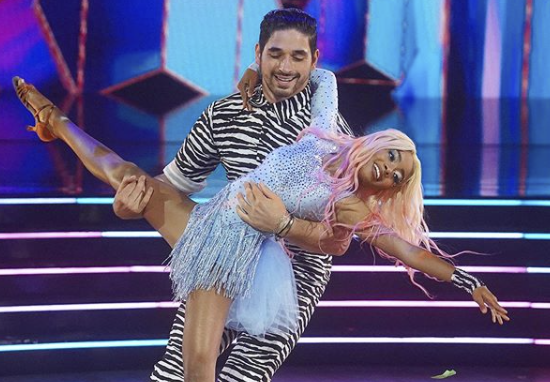 Last night was another tough night for Disney Channel star Skai Jackson. She and her partner Alan Bersten were frontrunners in the beginning, but don’t seem to have consistent performances. Some weeks they score really well, and other weeks they have quite a few mistakes. Last night they scored a combined total of 18 points for their Cha Cha to “Say So” by Dojo Cat featuring Nicki Minaj. However, it was the lowest score of the night.

Skai And Alan Plan To Put Their Performance In The Past

Despite her lackluster performance last night, Skai Jackson just wants to move on and focus on next week.

“It was honestly just a step that I worked really hard [on] and it was really hard for me to get into that next move. That’s what I personally messed up on,” the 18-year-old actress told ET. “And then from there, I just kind of blanked out and I was like, ‘What the heck is going on?’ But you know what, my motivation was like, ‘You’re going to get through this dance. Keep pushing.'”

The judges each gave her 6 points apiece. They docked points for forgetting part of the dance but praised her for pushing on anyway and finishing well.

“It motivates me and encourages me that Skai is so resilient and so determined, that she wants this so bad, that she doesn’t give up,” Alan said. “You don’t wish for this, but the way Skai handles it is such a positive outlook. It shows that she’s not going to give up. Little things can’t keep you down. You’ve gotta keep fighting for what you want. Clearly Skai wants to be here and it shows every time she goes on that floor. And it makes me so happy.”

Fans Keep The Couple In The Competition

But even with all her mistakes, Skai Jackson’s fans are voting to keep her in the competition. Twitter lit up last night with fans encouraging others to vote to save her. It worked — Skai and Alan narrowly escaped being in the bottom two.

“We’re going to be on top next week… What’s impressive is coming back strong,” the Season 28 champion said.

@skaijackson channeled her inner @dojacat and slayed the Cha Cha! If you loved it, SAY SO in the comments. 💖👇🏼#DWTS

Are you still a Skai supporter? Many still cheer her on, while others are growing frustrated with the inconsistent performances. Let us know what you think in the comments. Dancing With The Stars will be back on Monday night on 8 PM eastern time. Don’t forget to tune in.