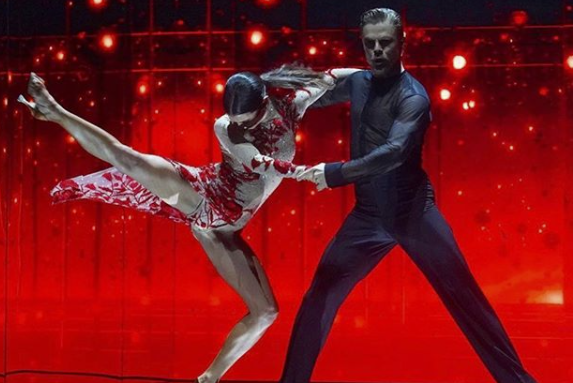 If you didn’t catch Dancing With The Stars last night, you really missed out. Derek Hough and his girlfriend Hayley Erbert absolutely obliterated the dance floor with their steamy Paso Doble routine to “Uccen” by Taalbi Brothers. After watching the performance, it became immediately clear why Derek is a six-time Mirrorball Trophy winner.

Their Paso Doble was electrifying. The mirrors, the music, the costumes — everything made it absolutely perfect. Derek even threw in an awesome flag twirling section in the middle. Judges didn’t give scores, but fans are confident Carrie Ann Inaba and Bruno Tonioli would both have given them 10s.

Derek Hough hasn’t performed on DWTS since 2017, but it seemed as if he never missed a beat. He and Hayley pulled off a flawless routine that has everyone talking.

“I’m very, very excited. I’m even more excited to be dancing with my lovely girlfriend, my love,” Derek said during the planning stages. “We get to dance together in the ballroom. We’re already planning it. We actually did a little session yesterday. We woke up this morning very sore, so we’re like, ‘Oh, OK, we have three weeks to make this happen.'”

This season we’ve seen a different side of Derek as he critiques contestants from the judge’s table. But it was definitely refreshing to see his return to the dance floor.

The Proposal That Didn’t Happen

And despite what fans expected, Derek did not propose. He previously said in an interview that he didn’t plan to, but fans hoped he might change his mind.

“I’m just going to be straight up, that’s not happening,” the newest DWTS judge told ET. “Just because, that’s just not my style I don’t think, you know?”

He went on to say that he just got comfortable sharing his relationship with Hayley with the public. A proposal on live television is still well outside of his comfort zone.

If you didn’t get a chance to see their amazing chemistry, you can check it out for yourself on the show’s YouTube channel:

Although Derek Hough’s performance was wildly popular, he will return to the judge’s table next week. But if you love watching Derek and Hayley, you can check out their YouTube channel, Dayley Life. They started it during quarantine and already have nearly 50,000 subscribers.

Make sure to catch Dancing With The Stars at 8 PM eastern time Monday nights on ABC. Peta and Vernon left the competition last night, which means we are down to the top 10 couples. Who do you think will be the next go home, and who do you think will win it all? Stay tuned to find out and don’t forget to vote!