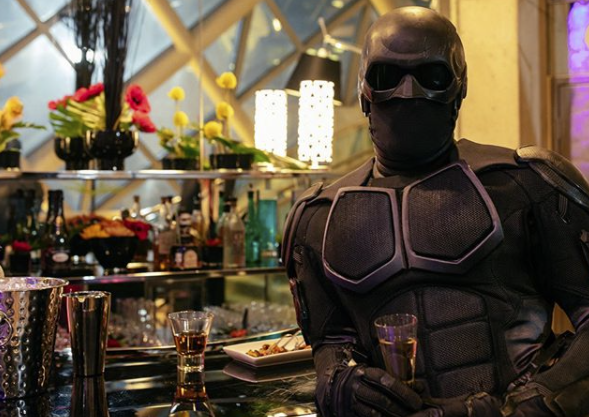 The Boys Season 2 came to a close last week. What will you watch now? The show’s production team says work on Season 3 will start sometime in early 2021 — as long as the pandemic allows it. But for now, fans have plenty of questions and they want answers, especially about Black Noir. Showrunner Eric Kripke is doing his best to answer them without giving away too much.

Fair warning — this article will contain spoilers about Season 2.

Many questions have one particular question in mind: will Black Noir be back?

When we last saw him, Queen Maeve took him out by shoving an Almond Joy in his mouth. She explains that he has a tree nut allergy. He begins to go into anaphylactic shock and reaches for his EpiPen, which Queen Maeve kicks away. In the season finale, we hear Stormfront confirm that Black Noir is in a vegetative state. He’s alive, but out of commission for the time being.

Fans have a right to be worried. The show has a habit of making their characters die in gruesome ways. (Lamplighter, anyone?)

But don’t worry, Kripke confirms we haven’t seen the last of Black Noir. In a Twitter Q&A session with fans, he confirms Black Noir will be back next season and we may even get a glimpse of what’s under the mask.

According to Kripke, Black Noir quickly became a fan favorite. And it’s really hard not to love the weirdo. He is dark, broody, and this season fans saw he clearly had no problem ripping people’s heads off. But then there are more tender moments, like when the Seven comes across a mutilated whale carcass and Black Noir is visibly upset.

And What About An Origin Story?

The Boys strayed a bit from the comics. So things on the screen may not necessarily play out how they have on the page. But in the comics, Black Noir is actually a Homelander clone. His purpose is to quietly kill and replace Homelander, should he ever snap and go rogue.

Kripke could go in that direction, although it doesn’t seem entirely likely at this point. Fans still don’t know what Black Noir looks like, but we saw the lower half of his face when Queen Maeve assaulted him with the candy bar. His skin appears darker and has a charred appearance. Could this give us some clues about Black Noir’s origins on the show? Let us know what you think.

What are some of your favorite Black Noir moments? Leave them in the comments below. The Boys probably won’t be back until September 2021, but that’s if the pandemic allows filming to continue. Hopefully, we’ll see another season sooner rather than later!