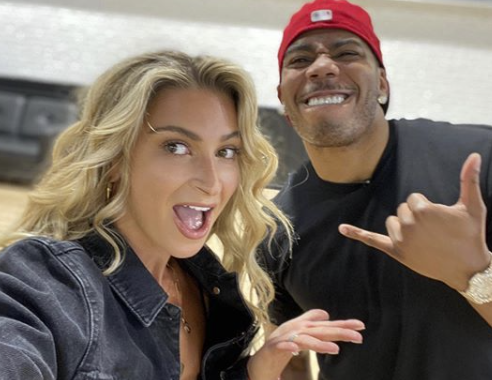 Daniella Karagach is a first time pro on Dancing With The Stars this year. She’s been a featured dancer on the show before, but Season 29 is the first year she paired with a celebrity to compete for the Mirrorball Trophy. She recently did a Q&A with fans on her Instagram story so fans can get to know her a little better.

Week after week, fans see Daniella and her partner Nelly pull off great routines. However, fans expressed concern about what goes on behind the scenes. During last week’s elimination, they couldn’t help but notice Nelly looked incredibly angry. While many other contestants happily hugged and ran off holding their partner’s hand, Nelly and Daniella barely acknowledged each other. The rapper has since denied the rumors they don’t get along, but fans wanted to see it from Daniella’s point of view.

One fan asked about all the tension last week. Daniella laughed it off and confirmed that they do indeed get along quite well. It was just a very nerve-wracking time. If they looked upset, she says they were really worried about their results. Tyra accidentally told Val and Monica they were safe when they were actually in the bottom two. Nelly and Daniella worried they may actually be in danger too. After they realized they would compete again next week, things cooled off.

Daniella Wouldn’t Want Anyone Else But Nelly For A Partner

Many other fans asked about what it was like to work with Nelly. According to Daniella, Nelly is incredibly hard-working. She says once rehearsal begins, he is rarely willing to take breaks — even if rehearsal is five hours long.

But things aren’t always quite so serious. Daniella describes Nelly as “hysterical,” and says she sees him like an older brother figure. While they do work hard behind the scenes, they’re also always laughing and having a good time. During 80s Night this week, the two will Samba to “Rhythm of the Night” by DeBarge. Daniella is excited for the routine this week, but says she can’t wait to teach Nelly ballroom. She says he picks up the steps really quickly and can’t wait to see him learn something new.

Daniella confirms she was ecstatic when she found out Nelly was going to be her celebrity partner. She admits she listened to him so much growing up and it’s been like a dream come true getting to know him. At one point, she says she gets a little sad thinking about future seasons and knowing Nelly won’t be her partner.

The Dancer Has Someone To Practice With At Home

Married couples weren’t allowed to live together while competing this year during the pandemic. And if you didn’t already know, there are many married couples competing for the Mirrorball Trophy. Daniella is married to Pasha Pashkov, Carole Baskin’s partner. Since Carole was eliminated in week 2, Pasha has been allowed to come home. Daniella says she’s happy to have him back, especially since it’s easier to practice choreography at home with another person.

According to Daniella, the couple met 12 years ago through their mutual dance teachers. She says she knew almost right away he was “the one,” and they’ve been together ever since. They got married six years ago and have been so happy ever since. She confirms they definitely want children, but are enjoying each other’s company for the time being.

At one point in the Q&A, a fan asked about her accent and nationality. Daniella gets that question a lot actually. She confirms that she is a first-generation American, born and raised in Brooklyn, New York. But her parents are from Moldova and she speaks fluent Russian. Since Pasha and his family are also Russian, she says she gets an accent from time to time.

After Daniella ended the Q&A, she started recording several hours later. She and Nelly were back in the rehearsal studio, prepping for Monday night’s performance. Fans are definitely in for a treat this week.

Follow Daniella on Instagram and tune in to Monday night’s new episode. If you love their performance, make sure to vote and keep them safe!