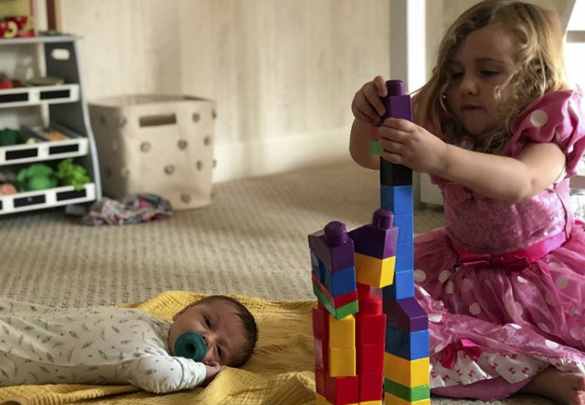 Two kids are enough for Total Bellas star Brie Bella. The former WWE superstar recently revealed she had her “tubes cut” after giving birth to her son Buddy this summer.

“I don’t know if I told people, but I got my [fallopian] tubes cut out,” Brie said during a recent episode of the Total Bellas podcast. “Yep. This mama ain’t having any more babies.”

Brie and her husband Daniel Bryan are also the parents of their three-year-old daughter, Birdie.

They are absolutely thrilled about the newest addition to their family. But for a while, they weren’t sure if they were able to have another baby.

“We were trying for eight months, and I couldn’t get pregnant,” Brie said back in December. “I was stressed, and it wasn’t happening. There were a couple times that I was so late and was sure I was pregnant. Then I would get my period and bleed really badly. I think the universe was telling me something, like, it’s not a great time to have another baby.”

But by January 2020, Brie announced she was expecting — and so was her twin sister, Nikki. The sisters actually gave birth a day apart from one another. Nikki gave birth on July 31, and Brie on August 1. Brie named her son Buddy Desert. The name may sound strange to some, but it’s incredibly meaningful to the family.

“Named after Bryan’s Dad and his middle name is pronounced Desert after my Nana’s maiden name,” Brie said about her son’s unique name. “He came into our lives in such a special way we wanted to name him after some special people.”

Now, the little family of four seems really complete. Brie Bella frequently posts on her Instagram page about cute things they’re all doing together. Most recently, they took a family trip to the pumpkin patch to get ring in the fall season.

Pumpkin Pickin’ with the fam 🎃

As football season heats up, she’s taken the opportunity to introduce her son to the game. Check out another story we wrote to see Buddy’s cute little football outfit. Isn’t he absolutely precious?

And of course, they all got matching Christmas pajamas.

We can’t wait to see more of the family when Total Bellas returns. E! renewed the show for Season 6 over the summer. Hopefully we won’t have to wait much longer for it to premiere.

If you liked this story, make sure to follow us on social media. We always have the latest celebrity and television news. Are you ready for Total Bellas to come back? Sound off in the comments.