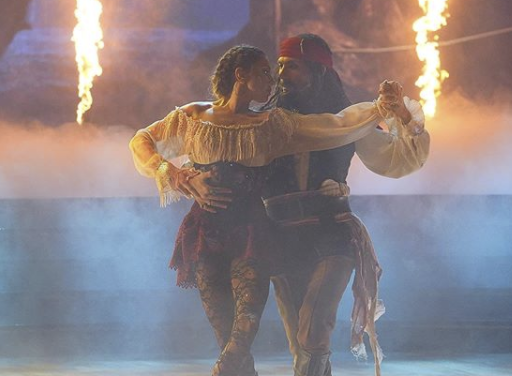 When the Dancing With The Stars cast list was announced, few people suspected Catfish‘s Nev Schulman would be one of the top competitors. But after the Disney Night performance, many fans think he and partner Jenna Johnson could win the whole competition.

If you missed DWTS last night, you can catch it here:

One thing that really makes Nev stand out is the fact that he consistently scores high. During week 1, he scored 20 points, and the next week he scored 21. His performance on Disney Night earned him 24 points. During the first week, Justina Machado and Skai Jackson took all the attention. However, Skai hasn’t been performing as well over the past few weeks, and Justina scored a 19 last night — the lowest she has scored so far.

Nev and Jenna get better and better each week. Who knows where they will go next week?

Others Critique The Harsh Judging This Year

Even though Nev Schulman is doing well this season, many argue that the judges aren’t being fair. Skai Jackson‘s fans have been particularly vocal. The 18-year-old Disney star did stumble during her week 2 performance, and her Jive to “Almost There” from The Princess and the Frog definitely wasn’t her best. But even so, many fans felt the judges gave her unfair scores when she earned a 6 from each judge.

Olympic figure skater Johnny Weir previously stated he thought the judges are being difficult this year. However, he scored well during Disney Night, so his feelings may have changed. In fact, Johnny and Nev tied for the top score last night. Nev quickly became a fan favorite, but he’s also got Johnny as a strong competitor. Only time will tell who will take home the Mirrorball Trophy.

Who do you think it will be? Sound off in the comments below.

So Who Went Home Last Night?

You probably heard by now that Carole Baskin is no longer part of Dancing With The Stars Season 29. She and Anne Heche found themselves in the bottom last night. Ultimately, the judges chose to save Anne. Even though Carole improved remarkably between weeks 1 and 2, she and her partner Pasha Pashkov failed to impress on Disney Night.

Although many DWTS fans love Chrishell Stause, they suspected she may be next on the chopping block. Instead, she surprised everyone with her Disney Night routine and scored a whopping 22 points. This is certainly impressive for someone who only scored 13 points during week 1. Fans also have their eyes on her as the competition heats up.

But if you love Nev Schulman as much as everyone else, don’t forget to vote for him! Tune in next week to see what happens on Dancing With The Stars for week 4.