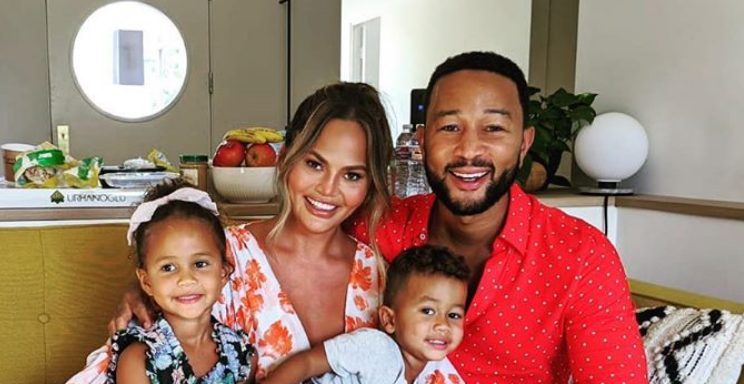 On Thursday, August 13, John Legend released a new music video for his song Wild. In the video, he and his wife Chrissy Teigen reveal some exciting news.

In the music video, John and Chrissy are on the beach. The music video also reveals clips of them driving and swimming together. They show off their romantic side in the video.

Later, John and Chrissy stand by the shore together. In one shot, John hugs Chrissy from behind while she cradles her growing baby bump. The camera zooms in on her belly, making it obvious that this is a pregnancy announcement, despite her stomach being small.

Us Weekly confirms the couple’s big news. Sources have also shared this information with PEOPLE. Both Chrissy and John shared about the music video on their Instagram pages, but neither has created a post specifically announcing the pregnancy. So, there are few details about the baby on the way. But, hopefully the couple will share more details very soon. Perhaps there will even be a big announcement post in addition to the music video.

Vevo also tweeted about the music video. In the tweet, the company adds, “Be sure to watch it now for a beautiful surprise!” Chrissy retweeted their tweet.

As fans began to notice the baby bump in the music video, they wished the couple the best. The comments section is filled with many congratulations for John and Chrissy and their growing family.

John and Chrissy already share two kids, Luna, 4, and Miles, 2. When Chrissy was expecting their second child, she talked about the possibility of baby number three. She said, “I think I do want to have another baby after this and then get hot. I just want to go babies, back to back to back, but then I think maybe I want to have my 30s, really live in my 30s and not just be pregnant throughout them.”

So, it looks like she and John followed through with their plan. But, it’s worth noting that Chrissy previously commented on how her kids are “exhausting.” In 2019, she mentioned that she and John might wait a little while before having more kids as a result. Perhaps they changed their minds, or maybe Chrissy was only joking. Nonetheless, it sounds like the couple’s lives are about to become even more “exhausting” now.

So, what do you think of John and Chrissy’s exciting announcement? Let us know in the comments below.