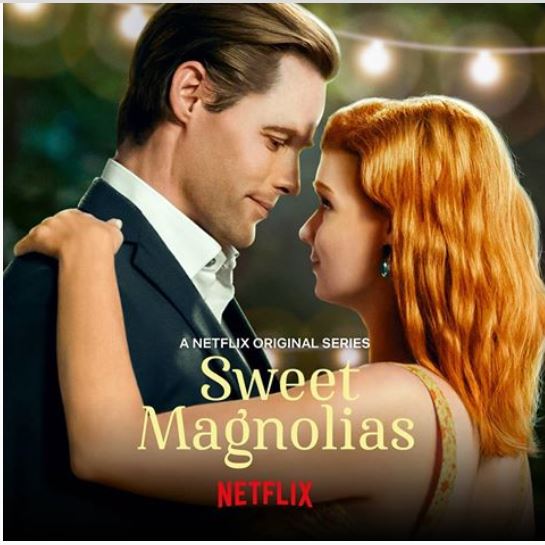 Luckily for fans of Netflix’s latest up and coming scripted drama series, Sweet Magnolias, Season 2 is in the works. Other series renewed on Netflix include Never Have I Ever, Gentefied, After Life, #BlackAF, and Lucifer. Sadly, the streaming service confirms that Lucifer is in its sixth and final season.

More about the new romantic drama’s on Netflix

The break out series is based on novels written by best-selling author, Sherryl Woods. Also of note, the series is the second “Hallmark-Esque romantic drama,” to stream on Netflix, as described by Hollywood Reporter. Virgin River is also renewed for a second season. Additionally, Virgin River is also based on novels with strong female protagonists according to Deadline. A Hallmark theme may be partially due to the fact that one of the executive producers hails from Hallmark. Chesapeake Shores’ Dan Paulson is one of Sweet Magnolia‘s executive producers.

A recap of Sweet Magnolias

Set in the heart of the South in fictional Serenity, South Carolina, the plot follows the close friendship of three best friends. The best friends are Maddie (JoAnna Garcia Swisher), Dana Sue (Brooke Elliot), and Helen (Heather Headley).  The cast hosts a range of actors that cause fans to think “I’ve seen them somewhere before.” Maddie, played by JoAnna Garcia Swisher, is recognizable from Reba. Fans of Drop Dead Diva may recognize Dana Sue as Jane, both played by Brooke Elliot.

SWEET MAGNOLIAS TAKEOVER with @thetraceybonner aka Pastor June Wilkes comes to an end with this special post dedicated to the love of my life!!! Thank you to all the fans…I hope you had a great day with me. I appreciate all the love & support. And just like you I’m hoping for a Season 2 so get the word out to @netflix & let them know how much you love the show! Much Love from your favorite pastor!🙏🏿❤️ __________ #sweetmagnolias #netflix #pastorjune

A post shared by Sweet Magnolias Netflix (@sweetmagnoliasnetflix) on Jun 7, 2020 at 6:17pm PDT

The trio is of women is a chef, a lawyer, and a recent divorcée. The strong, independent women are all facing different struggles in their lives, but the bond makes things a little easier since they aren’t alone.

Maybe a contributing factor to the success of Sweet Magnolias is the superb casting.  The cast is host to actors such as Chris Klein, Jamie Lynn Spears, Logan Allen, Anneliese Judge, Carson Rowland, and Justin Bruening of Grey’s Anatomy.

How does JoAnna Garcia Swisher feel about the series

On the heels of the Season 2 renewal announcement, JoAnna Garcia Swisher (Maddie), sat down with Elle for an interview. Over the course of the interview she discusses reading the script for the first time to what she hopes for the next season. Jokingly she says, “If Eric and Helen don’t get together, honestly, the world is a cold, dark place.”

UPDATE: thanks for tuning in! Look forward to another one soon! *** Instructions: •Use Netflix Watch Party on Chrome •clink link in bio •Pause your Netflix screen when it loads •click the NP button in the upper right corner of your browser •say hi to us in the chat room as we watch the first episode together

Without going into too much detail, Season 1 definitely left viewers on a cliffhanger. Even Swisher acknowledges that the finale is intense. So not to spoil the series for anyone that hasn’t watched it yet, let’s just say Season 2 of Sweet Magnolias could begin in what may seem like an alternate universe compared to Season 1 Episode 1.

While there is no official release date for Season 2, the cast and fans of Sweet Magnolias are eager for the show to return. Keep it tuned to TV Shows Ace for more Netflix and television news.