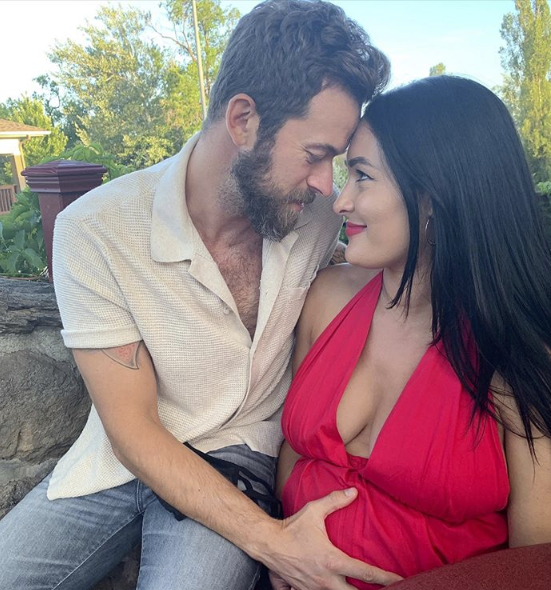 It’s the final countdown! Both Nikki Bella and her twin sister, Brie, are due in just a few short weeks. Nikki is looking forward to welcoming her new son into the world. She recently shared another pregnancy photo on Instagram.

“Sleepless nights are worth it the closer I get to meeting you,” the former WWE star wrote in an Instagram story. She posted another photo of herself and fiance Artem Chigvintsev looking lovingly at one another.

Nikki’s Dream of Being a Mother

Nikki Bella was previously engaged to wrestler John Cena. The power couple ended things in 2018. They definitely had their ups and downs. In the end, Nikki decided their views on family life were just too different. She said, “Overall, we did have such an incredible relationship, it was just two people that wanted two different lives.”

Fans knew it was clear John didn’t want children. However, he agreed to have his vasectomy reversed so Nikki could be a mother. Nikki was concerned he would regret his children, so she chose to end the relationship.

Regarding the choice to split up, Nikki said, “Even in the end when he was willing to give me kids, I could just tell, it’s not what we wanted. And that’s really, like, you know, what pushed me in the end, was like, if I’m going to force someone to be a father…what if he looks at you down the road and just regrets everything, and then you have this child and you’ve built this life.”

We know how difficult this choice was for Nikki, but we applaud her for making such a mature decision. Artem Chigvintsev seems genuinely thrilled about fatherhood.

The happy couple met on the set of Dancing with the Stars. They finished in seventh place. After Nikki’s breakup with John, she began seeing Artem. It wasn’t long before she knew he was the one.

“I remember one time, he turned me and dipped me, and it was just… I remember in that moment I just thought, I feel like this is the rest of my life.” She continued with thinking, “I’m either living in a movie or this is the type of feeling you’ll have when you know you’ve met The One. And I’ll never forget it,” Nikki said.

We’re so happy that Nikki and Artem are living happily ever after together. Before you know it, we’ll be reporting on the birth of their son. We have our fingers crossed that everything goes well and they can begin their lives as loving parents.

Be sure to keep up with TV Shows Ace. We have all the latest reality TV news you could ever want. Follow us for more updates on the Bella twins and their pregnancies. See you soon!