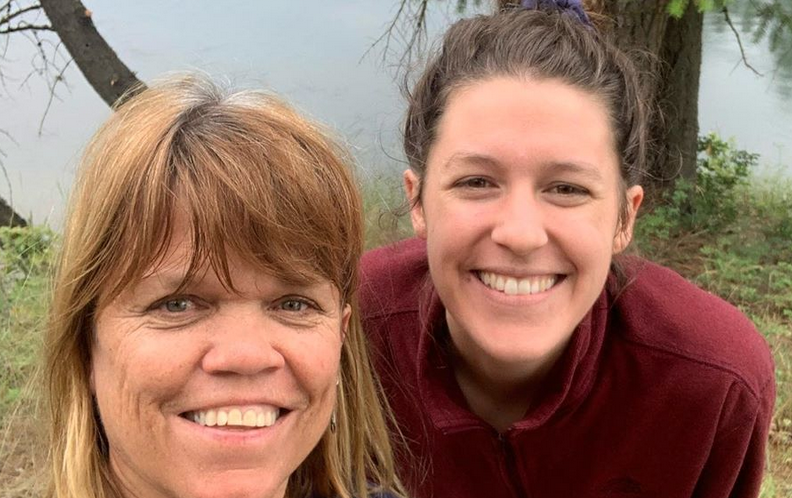 In a new social media post, Little People, Big World star Amy Roloff reveals she visited her daughter. Molly lives in Spokane, Washington. Amy’s post includes two photos. The first one features herself and Molly enjoying nature. In her caption, the LPBW matriarch says that they went on a two-mile hike. The second photo is of the salad that Molly made for her mom. In addition, on her Instagram stories, Amy documented a game of cornhole with Molly and her husband Joel.

In her post, Amy has lots of nice things to say about Molly. She talks about how proud she is of Molly. Then, she continues, “then she made a fabulous delicious salad. I’m so glad I came. I miss her 💗 ”

After reading the caption about Molly, LPBW fans are leaving similar comments, talking about how much they love Molly too. They think the mother-daughter duo is beautiful. And, they especially love that Amy got to visit her daughter.

Took a road trip up to Spokane this weekend to visit my daughter Molly and my SIL Joel. ♥️. She is simply amazing. So proud of her. We went on a 2 mile hike – I’m excited I did it 😆 – which was beautiful and then she made a fabulous delicious salad. I’m so glad I came. I miss her 💗 #spokane #lovemyfamily #lovethisgirl #roadtrip #mydaughter #letstakeahike #beingtogether #beenquaratine #timetovisit #thankful #blessed

Most of Matt and Amy’s kids aren’t on LPBW

Fans of the show will recognize that most of Matt and Amy’s kids aren’t a part of it. Zach and Tori Roloff, as well as their kids Jackson and Lilah, are on the show. But, the rest of the family doesn’t make appearances anymore. This includes Jacob and his wife Isabel, Jeremy and Audrey Roloff, and Molly and her husband Joel.

They all have their own reasons for leaving the show. For instance, Jeremy and Audrey felt that it was time for them to move onto other things. As far as Jacob and Isabel are concerned, Jacob says, “Producers have to try to get us to follow the talking points. For me, noticing how the agenda of the crew doesn’t work well with the health and happiness of our family is what made me decide quite a while ago that I would not be a part of it as soon as I was able.”

Molly hasn’t directly stated why she is no longer on the show. It’s possible this has something to do with her living in Spokane, while Roloff Farms is located in Hillsboro, Oregon. But, this is purely speculation. Nonetheless, fans seem to love Molly and wish they could see more of her. Fortunately, LPBW fans seem to respect her decision not to be on the show.

I get comments on here all the time about how people 'miss me on the show' or telling me I should 'do a few more episodes' with the family; I'm posting this to say that that will never happen. For the sake of 'the episode' and ratings I've seen a lot of STORYLINES drawn up (loosely) about our lives, and when I was standing here, behind the scenes and watching it from an outside perspective I just couldn't stop laughing. Laughing at how hard the producers have to try to get us to follow the talking points, and at how ridiculous the talking points are. . To misquote Chomsky, "the primary objective of any system is to preserve the integrity of that system", meaning, the primary objective I have felt and observed over the years of the 'crew' is to preserve their job and preserve the ratings, which is up to you to be right or wrong. That's not to say they are all soulless corporate shills or something, there are and have been good people involved but that doesn't negate the fact that they do have their own personal agenda. For me, noticing how the agenda of the crew doesn't work well with the health & happiness of our family is what made me decide quite a while ago that I would not be a part of it as soon as I was able. . All in all I appreciate people wanting me to 'be with the family' for a few more episodes, but the family that is filmed is not my family. They are the Roloff Characters and I have scarcely anything in common with them, nor do I want to be a character myself. As soon as the cameras drop however, its almost like they never played the part. 20 minutes after this picture was taken we all, plus friends, had a campfire late into the night. So, I am with my family and I love them I'm just here to say you'll never see that from me on TV again. (This picture is from a few months ago)

So, what do you think of the newest post from Amy? Share your thoughts in the comments below.

The most recent season of LPBW recently came to an end. Stay tuned for news on the show’s renewal or cancelation.

Anna Duggar Flees Courtroom While Fighting Back Tears
‘Welcome To Plathville’ Moriah Plath Has Moved On To Her New Love
‘Bringing Up Bates:’ Katie Begs Travis Clark For Adorable Baby, Is It Time?
Khloe Kardashian Vows To Teach Kendall How To Cut A Cucumber
Kourtney Kardashian & Travis Barker Rent Castle For Italian Wedding