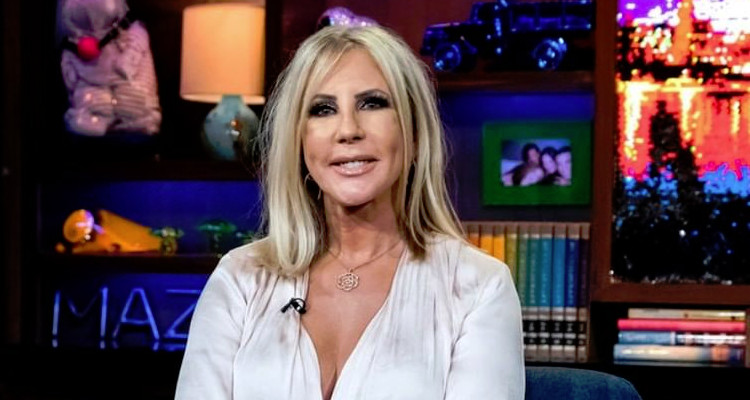 The Real Housewives of Orange County star Vicki Gunvalson isn’t holding anything back on her new podcast. Bravo host Andy Cohen joined the RHOC alum for her latest episode of Whoop It Up With Vicki. The pair made amends after a tense Season 14 reunion and dished on all things Real Housewives.

A new episode of @whoopitupwithvicki drops tomorrow. Can you guess who my special guest will be? Make sure to subscribe so you don’t miss anything! #linkinbio #whoopitup #podcast

Among the topics of discussion was her thoughts on The Real Housewives of New Jersey star Teresa Giudice’s legal problems.

RHONJ Star and Estranged Husband Did Prison Time for Fraud

As Bravo fans know, RHONJ’s Teresa and her estranged husband, Joe Giudice, served time in prison. The former couple plead guilty to charges of mail fraud, bank fraud and other felonies related to their money.

Joe was also convicted separately for not paying taxes. At the time and since then, both Joe and Teresa maintain that she didn’t know anything about the fraud.

Back in October, they sat down with Andy for their first joint interview after Joe was released from ICE custody. As TV Shows Ace reported at the time, Joe said he didn’t blame Teresa for him ending up in prison.

Fans and non-fans alike have been skeptical over the years about how much Teresa knew about how Joe got his money. During the early seasons of RHONJ, the former couple’s lavish lifestyle was on display. In one episode, Teresa paid $120,000 in cash when buying furniture.

The RHOC alum is one of those doubters who think Teresa knew more than she’s ever admitted. Vicki says,

“There’s a lot I don’t know about it [but] I think [Teresa] knew more than what she’s leading onto. She had to. She’s not an idiot, right?”

Vicki went on to say that she “could teach” Teresa some things about finance. Aside from dishing on Real Housewives, Vicki’s podcast is meant to educate listeners on all things money.

The RHOC OG got engaged to boyfriend Steve Lodge in April of 2019. At the Season 14 reunion, Vicki’s co-stars implied her behavior changed drastically after meeting her now-fiance.

According to Reality Blurb, Vicki’s behavior became more reserved and conservative on the show because of Steve’s views. When Andy brought the situation up on the podcast, Vicki agreed with the assessment.

During the reunion, Vicki took issue with RHOC newbie Braunwyn Windham-Burke for making out with co-star Tamra Judge during filming. Vicki alluded to that when she said, “I’m a little older right now. But he is conservative. He doesn’t agree with taking your top off and kissing another woman.”

Vicki did admit that she “doesn’t understand” married women kissing other women. To Vicki, that’s cheating and she said, “I don’t do that anymore.”

The RHOC star said that she hoped her change in behavior wasn’t the reason why she was fired. As fans know, Vicki wasn’t asked to return for Season 15. Her role was drastically reduced for Season 14, which she was unhappy about.