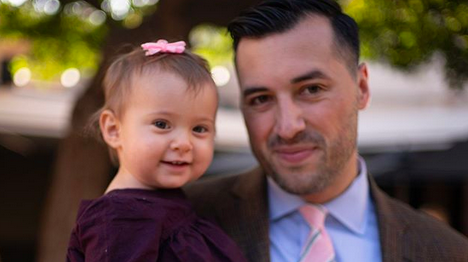 Dad jokes are jokes that are so bad that they make people groan. They’re often unoriginal. They usually aren’t even funny. But, dads still tell them, and sometimes, we still laugh. There are even books and lists full of dad jokes for dads to tell. Dad jokes are pretty popular, and not necessarily for a good reason. Now, it looks like a Duggar dad has decided to start using dad jokes, too.

On a recent post on social media, Jeremy included a dad joke in his caption. He shared a sweet picture of his one-year-old daughter, Felicity. She’s wearing a purple dress and shiny shoes. She’s got a bow headband on and is looking adorable, fans think.

The Duggar granddaughter is holding a dandelion in one hand and has a flower tucked behind one of her ears. Of course, Jeremy used this as a chance to crack a dad joke. He wrote, “I think she’s dandy and I’m not lion 🌼”.

I think she's dandy and I'm not lion 🌼

Duggar fans are impressed that Jeremy is already using dad jokes. His little girl is only one year old. Plus, he’s pretty young himself at just 32 years old. Still, he thought it was the perfect time to share the joke. Apparently, it’s never too early to start making dad jokes.

Someone commented on Jeremy’s post and said, “You are officially a dad with that caption. All aboard the cringe train! 🤦🏻‍♂️🚂” Even though that fan was making fun of Jeremy’s caption, he included a dad joke of his own. The Counting On dad was quick to notice this and said, “calling out a dad joke…with a dad joke. Well played, sir 👏🏼” Someone in the comments section thought that the first comment was rude and didn’t understand that the comment was a joke. They reminded the user who first mentioned Jeremy’s dad joke to “be kind”.

Another one of Jeremy’s followers said, “Wow really embracing the Dad jokes huh? Lolol”. Someone else said, “Incoming Dad joke😂😂😂she’s beautiful.” Another said, “Oooohhhh look at you with the corny dad joke!!!! LOVE IT!” Finally, one user said, “I see what ya did there!! 😉😎😁”

Between the replies calling Jeremy out for his dad joke, Duggar fans commented about how cute Felicity looks in the picture. They think the little girl is adorable and they love her little dress. A couple of fans agreed that Felicity looks just like Jeremy’s mom.

Felicity definitely seems to be a favorite of Duggar fans. They love to see new pictures of the little girl and watch her as she grows.

What do you think of Jeremy’s dad joke? Leave a comment below.