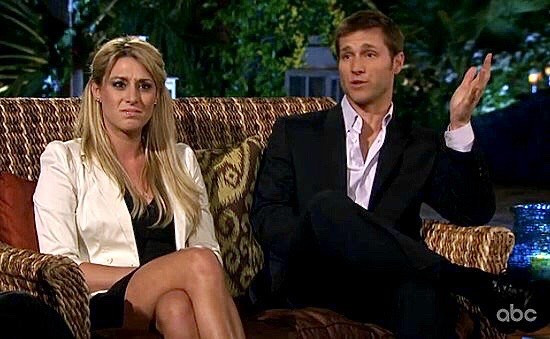 By 2010 The Bachelor already had 13 seasons under its wings. During Season 14, a literal pilot took the lead. And boy, did he deliver the drama.

Here are 10 of the most shocking moments in Bachelor Nation in the last ten years.

Jake Pavelka brought The Bachelor into the next decade for the show’s 14th season. Vienna Girardi was overwhelmingly hated by the other women vying for Jake’s affection. However, Jake fell in love with Vienna and proposed at the end of the show.

A few months later, the duo broke up publicly during a television appearance on ABC. Jake was upset that Vienna sold stories about their relationship to gossip magazines. In turn, Vienna accused Jake of being verbally and emotionally abusive.

Jake denied this while screaming at Vienna on-camera to stop interrupting him. Vienna promptly burst into tears. Social media wasn’t popular at the time, but a Bachelor Nation fan put a clip of the awkward exchange on Instagram.

Contestant Kicked Off for Relationship with Cameraman

Also during Jake’s season, Rozlyn Papa was abruptly sent home for “inappropriate” behavior. Rumors circulated that the contestant was caught making out with a cameraman.

The Bachelorette Suitor Gets Huge Tattoo

The success of The Bachelor lead to a spin-off with a woman in the lead role. The Bachelorette was airing Season 6 in 2010. Ali Fedotowsky had her share of “bad boys” fighting for her attention.

Just four episodes into the season, Kasey Kahl got a six-inch tattoo to prove his love to Ali. Needless to say, he didn’t make it to the 5th episode. Ali left him standing on a glacier in Iceland as she helicoptered away with Justin Rego.

Justin brought his own drama. The wrestler was accused of only appearing on the show for publicity. When Ali tried to confront him, Justin ran away…. Except he had hurt his foot earlier and was in a walking cast. Awkward!

Brad Womack made The Bachelor history during Season 11 but not choosing either of the final two contestants.

ABC riled fans by bringing Brad back for Season 15.

The bar owner had better luck the second time around. Brad proposed to Emily Maynard. However, the couple broke up two months after the show’s final episode.

Emily went on to star in the 8th season of The Bachelorette. Her relationship with winner Jef Holm also ended after the show.

Courtney Robertson took over for Vienna as the most-hated female contender in The Bachelor history. The former model announced at the beginning of the season that, “I’m not here to make friends” and she didn’t.

She also didn’t win any fans. Especially after cameras caught her skinny-dipping with the show’s lead, Ben Flajnik.

She ultimately went on to win his affections, but ended the relationship seven months later.

Courtney recently revealed that she’s engaged and pregnant with her first child.

Another Couple Gets Frisky in the Ocean

Ben and Courtney may have been the first to frolic in the ocean, but they weren’t the last. Season 18’s Juan Pablo Galavis got romantic with Clare Crawley.

Fans were not happy that Juan and Clare seemingly got busy in the ocean. He later sent her home after telling her, “I love f*cking you, but I don’t know you.”

Needless to say, Juan is not a The Bachelor fan favorite.

Bachelor in Paradise Production Gets Shut Down Briefly

Another spin-off, Bachelor Pad, was replaced by Bachelor in Paradise in 2014. Production of Season 4 was briefly shut down over misconduct allegations involving two stars.

Corinne Olympios and DeMario Jackson were at the center of the controversy. As fans may remember, Corinne shocked Season 21’s Nick Viall with the revelation that she still has a nanny.

The Bachelor in Paradise incident involved concerns that a drunk Corinne was unable to consent to have intimate relations with DeMario. Production later resumed without the involvement of the two stars involved in the controversy.

The Jason Mesnick of the 2010s

One of the most infamous moments in The Bachelor history involved Jason Mesnick. The Season 13 lead dumped his final pick, Melissa Rycroft, during the After the Final Rose special. He promptly asked Molly Malaney for a second chance. The couple’s tenth wedding anniversary is coming up in 2020.

Season 22 star, Arie Luyendyk, also had second thoughts on his choice. Arie faced the ire of fans by filming his breakup with Becca Kufrin for the show. He later proposed to runner-up, Lauren Burnham, on After the Final Rose.

Arie and Lauren married in 2019 and welcomed their first child together.

During Season 23, The Bachelor Colton Underwood took a fancy to Cassie Randolph. Toward the end of the season, Cassie tried to quit the show. An upset Colton lost it on the producers and tried to get away from the cameras.

Except there was a fence in his way. The former football player jumped over the fence and disappeared into the night.

He later returned and is still dating Cassie. Hannah B still teases the fence jump on her Instagram.

One thing The Bachelorette contestant Luke Parker didn’t like was a liberated woman. He informed Season 15 lead Hannah Brown that he didn’t want to be on the show if she was intimate with the other men.

She retorted that he might want to leave the show then, because she “f*cked in a windmill” while on a date.

Hannah later saucily revealed during After the Final Rose that it was actually four times. Her suitor, Peter Weber, didn’t get her final rose. However, he did get cast at the next The Bachelor.

The Bachelor returns to ABC on Monday, January 6, 2020. Us Weekly has even more shocking moments of Bachelor Nation.