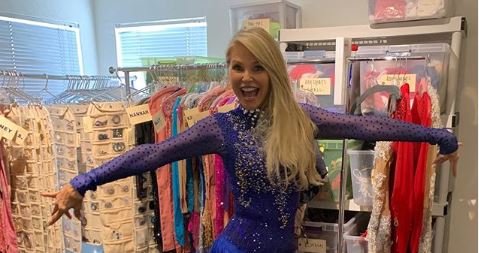 It turns out that Dancing With the Stars had a big shakeup. Christie Brinkley was supposed to be dancing. Just nine hours ago, she posted how excited she was on her Instagram. Now, instead her daughter Sailor Brinkley-Cook will be dancing in her place. This was a big last-minute change.

What happened to Christie Brinkley?

People shared the details about this big change. While Christie was practicing for Dancing With the Stars she ended up hurting herself. It turns out that she broke her arm while rehearsing. They have now replaced her on the show with her daughter. You can actually see what happened below.

.@Ginger_Zee is giving us a sneak peek of this season of @dancingABC — including an interview with @SeaBrinkley's daughter Sailor who will be taking her place after she broke her arm in rehearsal. #DWTS https://t.co/vCu1GI9DWR pic.twitter.com/X5Bv05Aqkx

ABC shared saying, “We wish Christie a full and speedy recovery and look forward to seeing her in the audience, whenever possible, proudly supporting Sailor.” It looks like she tripped over the foot of her partner while rehearsing.

Christie Brinkley actually had to have surgery on her arm and wrist. There was no way she would be ready to dance this season. Maybe she can do it in the future, though.

Big changes due to injury

Because of her injury, they had to replace Christie on Dancing With the Stars. Instead, her daughter Sailor Brinkley-Cook will be dancing for her. Of course, she is at a bit of a disadvantage. She didn’t have near as much time to practice. Christie is the one who has been doing the rehearsals.

Sailor has already started practicing and she even gets to wear the costume planned for her mom tonight. The crazy thing is it fits her perfect. they didn’t even have to alter it for her. Sailor talked about joining the show. Here is what she had to share.

“I’m doing this mostly for my mom! I just want to make her happy and make her proud. She loved doing this, she loves dancing and she loves performing and getting hurt was her worst nightmare.”

Don’t miss new episodes of Dancing With the Stars on Monday nights on ABC. Tonight is the first night of this season. Tomorrow night you can catch the big season finale and reunion of Bachelor in Paradise.