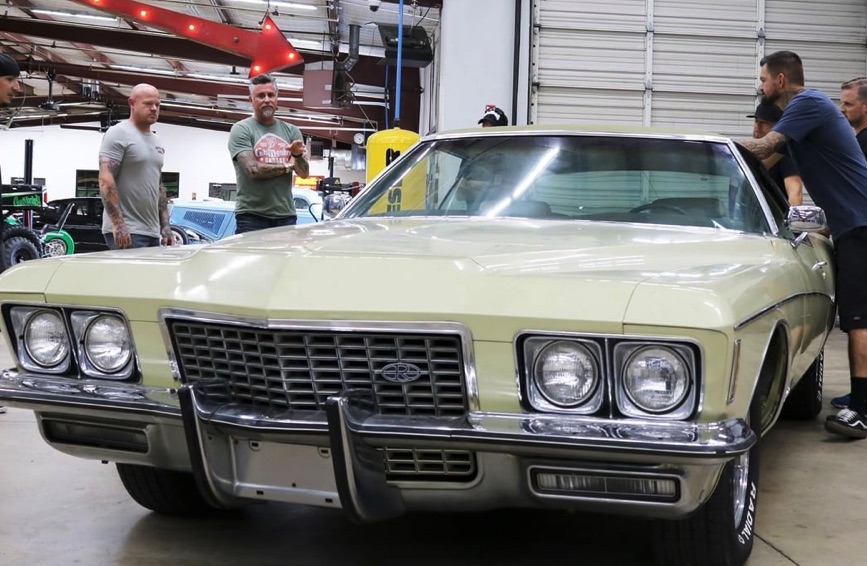 On Fast N’ Loud Season 15, Richard Rawlings of Gas Monkey Garage is building a Buick Riviera supercar and putting major bucks into the build. Rawlings says it is the first one of its kind, but he has a challenger. J.F. Launier of JF Kustoms built one in 2014 and won the Ridler award for it. J.F. is challenging Rawlings to a race in the Rivieras, and wants to get the message out there to Rawlings to have an actual race.

Richard Rawlings has been quite excited about Fast N’ Loud Season 15. He has especially been excited about this Buick Riviera build. On the Joe Rogan podcast, Rawlings gushed that people will be “amazed” by the builds this season. But the biggest build of the season is not just one episode. The Buick Riviera $300,000 evolution will be a season-long build.

The final goal is to take the Battleship Buick Riviera to SEMA. That is the acronym for Specialty Equipment Market Association. This is trade-only event, where participants must pass eligibility requirements within the automobile industry to attend. Needless to say, Gas Monkey Garage passes that requirement with flying colors. Richard is clearly proud of it. He just wants to know if Fast N’ Loud fans are as excited as he.

“Told y’all this super car is no joke! The Battleship Buick will be one of the most expensive and biggest Gas Monkey builds ever! Theres a lot riding on this but I know with my team we’ll be able to deliver a knockout to SEMA! The question now is what do y’all think of the build?”

Already, the Gas Monkey Garage social media has posted some clips of the obstacles in building this supercar. This includes no fuel line and removing an inch from the top of the vehicle. This superbuild is already gaining notice of some other shops, including one with their own award-winning Buick Riviera.

Will There Be a Buick Riviera Showdown?

JF Kustoms is based out of Osoyoos, Canada, which is 246 miles east of Vancouver. The orange Buick Riviera, which they named the Rivision, won the coveted Ridler Award. According the JF Kustoms website, this award is given to the “most creative and custom car” each year. But can it beat out the Battleship Buick?

It certainly has a lot of similarities to Richard’s build: It cost $300k to build, although it took J.F. and his team six years. According to Cars Barcroft, he took it from a “rust bucket into America’s best custom car.” He spent 22,000 hours to build this car. He now values the vehicle at $1.6 million, in man-hours alone! Not bad for an abandoned car that he found for a mere $400. But this did not go without sacrifice. He remortgaged his house, as did his supportive parents. There was a lot of sacrifice and doubt, but in the end he prevailed. His car is now a huge part of his legacy and his life. Launier says he has drag raced the vehicle, but it is also a family car. He is known to take his kids out for ice cream in this award-winning Buick.

His own changes to this car included putting in a 1971 roof on the 1964 vehicle. He also shortened the car by removing sheet metal behind the doors and rear-wheel openings. He added a  6.2 liter, twin turbo, Chevy V-8 engine by moving the front-wheel openings forward. It would be interesting to see Richard and J.F.’s vehicles side-by-side. Hopefully, this will be part of Fast N’ Loud Season 15.