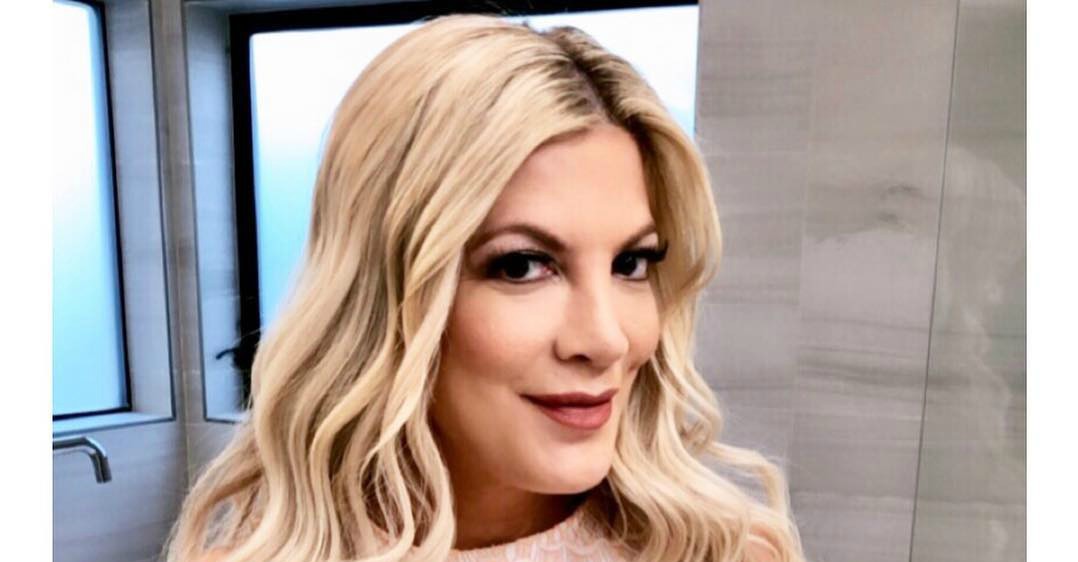 Beverly Hills 90210 fans rejoice: everything 90s is new again. Including a revival of the staple in every teenage girl’s must-see TV. The original cast of 90210 come together to play exaggerated versions of themselves, whatever that means. We’ll find out this week when the first new episode drops this week.

The stars of the show are making the radio and television interview rounds. Tori Spelling sat down with Jenny McCarthy on her hit Sirius XM show, The Jenny McCarthy Show. The topic of the newest Real Housewives of Beverly Hills star, Denise Richards, came up.

As fans know, Denise Richards will appear on the new BH90210. The actresses have been longtime friends and Denise appeared in an episode of the original show. Tori revealed that she is also friends with RHOBH’s Teddi Mellencamp. She even hired Teddi as her accountability coach last year.

Last week of filming @bh90210 AND 8 more days till our premiere on @foxtv (Wednesday, August 7)! – Can’t wait to share with you all the fun we’ve been having being back together. For anyone who’s ever said “You can’t go home again” we are living proof that you can! I’ve had some of the best laughs, hugs, shared memories, great realizations, and feeling of life coming full circle this summer! I love all of my old family and all of the new family members we’ve welcomed. #ASummerToRemember #LetsDoItAgain #Memories #Love #Family #bh90210

Jennie Garth Reveals She Has Been Approached to Join RHOBH

In response to the idea of her joining the hit Bravo show, Jennie said, “I’m the furthest thing from a desperate housewife.” Confusing the show’s title with an ABC show. Tori clarified the name of the show for her BH90210 co-star/BFF.

Tori also revealed during the interview that she has never been asked to join the show. The Troop Beverly Hills actress said she was sad she’d never been asked. She explained why she would be a good fit for the show, “I’m married with a lot of kids, drama follows me everywhere, they’ve never asked me!”

Tori Says Jennie Can “Throw Down,” Possibly Alluding to Rumors of Catfights with 90210 Co-Star Shannen Doherty

Fans of the original 90210 vividly recall rumors of tension on-set between Jennie, Tori and Shannen Doherty. In fact, Shannen reportedly left the show over the disagreements. A reputation as being difficult to work with follows Shannen even years later.

Jokingly, Tori asked Jennie if she can imagine herself getting into catfights with the other RHOBH stars. Jennie quickly responded that it’s “not her jam,” but Tori was quick to admit that her friend can “throw down.”

It’s ironic that Jennie seemingly turned her nose up at the idea of her starring in a reality show. She had her own show on CMT, Jennie Garth: A Little Bit Country. She also appeared on Season 5 of Dancing With the Stars.

Tori has starred in three reality shows over the years. She was rumored to be a contestant on DWTS several times but hasn’t yet made the cut. There’s always next season!

It’s FRI-YAY… and I am so thrilled to be back in my zip code with my tv family. Feeling very blessed to have all of these people as onscreen and off screen friends. Life imitates art and art imitates life. For all of us it’s a blend of these two worlds. Our family @bh90210 returns to your family August 7th on @foxtv #bh90210